Visit a Basketball Hall of Fame

By: Richard Phelps and Tim Bourret and John Walters and
Updated: 03-26-2016
From The Book: Basketball For Dummies 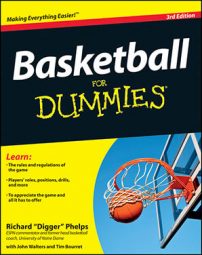 When people talk about the basketball hall of fame, they're likely referring to the granddaddy of 'em all, the Naismith Memorial Basketball Hall of Fame in Springfield, Massachusetts. But other halls of fame dedicated to this sport are no less enjoyable to visit. First, take a virtual pilgrimage to Springfield:

Where can a basketball fan find nearly 300 hall-of-fame inductees and more than 40,000 square feet of basketball history? Look no further than the Naismith Memorial Basketball Hall of Fame in Springfield, Massachusetts. Located on the picturesque banks of the Connecticut River, the museum is a fitting shrine to the game Dr. James Naismith invented more than a century ago. The landmark structure is one of the world's most distinctive monuments punctuating the Springfield skyline and stirring the spirits of basketball fans everywhere. Hundreds of interactive exhibits share the spotlight with skills challenges, live clinics, and shooting contests. And of course there is enough basketball history to impress the world's most avid sports fans. The Naismith Memorial Basketball Hall of Fame celebrated its 50th Anniversary in 2009.

The National Collegiate Basketball Hall of Fame, located in Kansas City, Missouri, is a hall of fame and museum dedicated to college basketball. The museum is an integral portion of the College Basketball Experience created by the National Association of Basketball Coaches (NABC), located at the Sprint Center. The hall is meant as a complement to the Naismith Memorial Basketball Hall of Fame, with a focus strictly on those who have contributed greatly to college basketball.

The Women's Basketball Hall of Fame opened in June 1999 in Knoxville, Tennessee. It is the only facility of its kind dedicated to all levels of women's basketball. The Hall is filled with multimedia presentations and numerous basketball artifacts, photographs, scrapbooks, medals, trophies, and old uniforms that bring the history of women's basketball to life. In the State Farm Tip-Off theater, you will see Hoopful of Hope, a 17-minute video production covering the history of our game. The production shows some of the all-time greats from the sport including players, coaches, and teams from AAU, collegiate, and professional organizations.