When shooting with the Nikon D7100, this setting determines the resolution, or frame size, of your movie, as well as the number of frames per second (fps), both of which affect video quality. 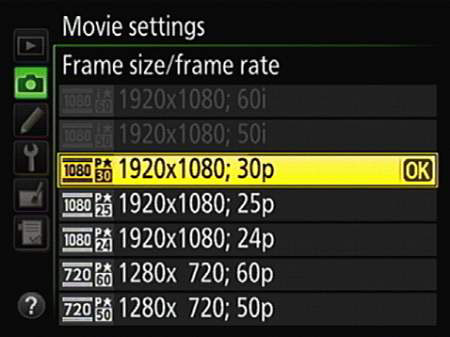 If you're a digital video expert, these options probably make perfect sense to you; take your pick and move on. If you're new to video, here is some background that will help you understand this numerical soup.

The first thing you need to know is that which Frame Size/Frame Rate options are available depends on the Image Area setting. At the default setting, DX, the camera uses the maximum area of the image sensor to record the image or, in this case, your 16:9 video.

The other Image Area option, 1.3x crop, uses a smaller area at the center of the sensor. For movie recording, you can access the first two Frame Size/Frame Rate options only when using the 1.3x crop setting; otherwise, they're dimmed.

So summing up, select from one of the following options if you want your movie to adhere to the NTSC video format:

One more note before you head out to simpler pastures: See the little symbols appearing to the left of each setting? They're simply (yeah, right, "simply") a reminder of what you see on the Live View screen to indicate each setting.

The first number specifies the vertical pixel count of the Frame Size; the p or i indicates progressive or interlaced, and the other number tells you the frame rate. Oh, that little star? It means that you selected High as the Movie Quality option. No star means that option is set to Normal.