Photography for Beginners: Choosing the Right Level of Camera

By: Julie Adair King and
Updated: 03-13-2020
From The Book: Digital Photography For Dummies

Explore Book Buy On Amazon
Digital photography is an art, but it can also be a fun hobby for beginners. Digital cameras come in a variety of sizes, styles, and even colors. Before you buy, it helps to consider whether you’re best suited to a basic, intermediate, or advanced camera. Let’s take a look at these categories:

A basic model is perfect if you're a casual photographer. That is, you enjoy taking selfies, shooting pictures of the gang at special occasions, and sharing photos of your kids or pets online. Or perhaps your work requires photographic documentation of some sort. For example, an insurance adjuster needs to include pictures of hail damage in order to process a claim. Either way, you want your pictures to be as good as possible, but you aren't interested in taking classes or otherwise learning advanced photography techniques..

Often not included on cameras in this category are automatic shooting modes or other make-it-easy features that you find on basic and intermediate cameras. Some models don’t even offer a built-in flash, requiring you to buy a separate flash unit. This leads to the following caution: No matter how much the camera salesperson (or your professional photographer friend) tries to convince you to “start at the top,” don't buy an advanced camera until you master an intermediate model.

The added complexity will likely overwhelm you, not to mention make a larger dent in your bank account. Step up to this level only if you start doing projects that require features not found on your intermediate-level model.

Of course, you may have multiple-photography personality, as many photographers do, and need more than one option at your disposal. For example, for wildlife and travel photography, you might lug around the large, advanced body and telephoto lens shown on the far left below. (This type of camera is called a dSLR, which stands for digital Single Lens Reflex)

You can get awesome shots with this setup, but it’s too large to carry all the time. For casual shots on the go, you can simply use your smartphone — it's great for snapping scenes that catch your eye while walking the dog, for example. As a point of reference, the phone in the image measures about 5 1/2 inches tall and about 3 inches wide. 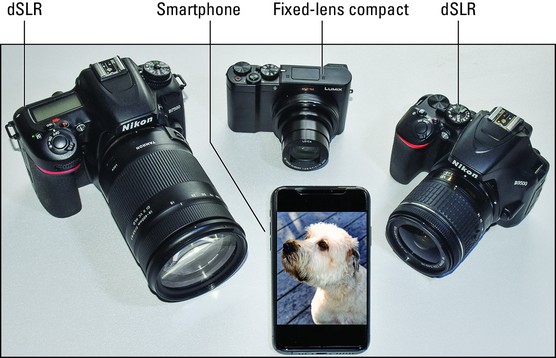 Each of these cameras plays a different role in a photographer’s life.

Then there are times when you don’t need all the bells and whistles of a “big rig” but want more features than a phone provides – a zoom lens, for example, or a viewfinder that makes framing shots easier than relying on the phone’s screen, which can wash out in the sun.

For those outings, you might pick up one of the two smaller models in the image above, both of which sport intermediate-level controls. The one in the middle of the picture is a fixed-lens model (meaning you can’t swap out lenses), but it has a pretty long-range zoom lens and fits easily into a purse.

The other dSLR model (the far-right camera) isn’t really purse material, but it works with the same lenses and flash that can be attached to an advanced model, and the body is considerably smaller and lighter than my other dSLR.

All of which is to say that it's okay to put more than one camera on your next birthday wish list. In fact, it’s recommended. But you still need to make sure that each model you buy suits the type of photography you want to do.

How much control do you want in your first camera?

Unless you’ve taken photography classes, you may not be aware of how much creative input a photographer can have over a picture, so the images you see below offer a few examples.

Each image shows two variations of the same scene, both shot with an intermediate-level camera. The first image in each pair shows the result of shooting in the camera’s fully automatic shooting mode.

In Auto mode, the camera makes all the decisions for you, determining characteristics such as the brightness of the scene, whether moving objects appear sharp or blurry, and how much of the scene appears in focus. The second example in each image shows a variation that was created by switching out of Auto mode and adjusting camera settings that modify these aspects of a photo.

Here’s a brief explanation of which camera controls enabled were used to produce the variations:

The shot produced in Auto mode (left) lacked drama, so the photographer used an exposure-adjustment control to produce the darker version (right).

Keep in mind, too, that for very precise exposure control, you may need access to other options not available on basic cameras, such as the choice to enable or disable flash. 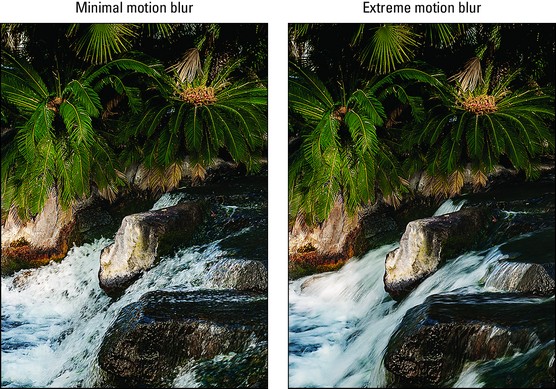 Auto mode typically renders a waterfall similar to the left example; you need control over shutter speed to get the misty look shown in the right image.

Basic cameras don’t offer control over shutter speed; however, some offer a “blur motion” mode designed to automatically choose a slower than usual shutter speed. Still, you rarely can set a specific shutter speed on basic models, so you can’t alter the amount of blur the camera produces. You can also add blur in a photo editor.

Neither version of the photos above is right or wrong. Beauty, as they say, is in the eye of the beholder. The point is, if you care about these artistic decisions, you need a camera that lets you take charge of the aforementioned settings as well as others that control focusing, color, and image quality.

So how do you find such a camera? Start by checking out the table below, which lists the top ten features for photographers interested in fully exploring the artistic side of photography. Please don't freak out about the photography lingo found in the table — shutter speed, aperture, focal length, blah blah blah. Those are easy enough to learn about for any budding photographer. If you’re a beginner, just use the table as a handy reference when you’re looking at camera specs.

Julie Adair King is a longtime Dummies author and photography instructor. She’s credited on over 40 books covering various Nikon, Canon, and Olympus cameras, as well as nine editions of Digital Photography For Dummies. When not writing, she teaches master classes in photography and photo retouching.