Magnifying Photos During Playback on the Nikon D7500 Camera 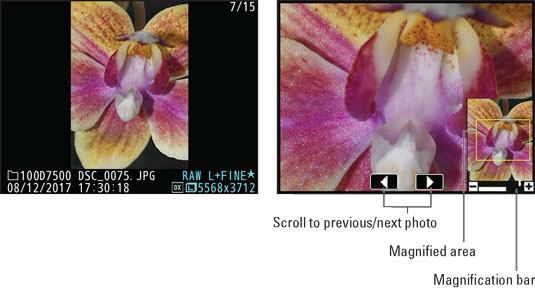 Press the Zoom In button or pinch out on the touchscreen to magnify an image.

After a few seconds, the navigation thumbnail disappears; tap the screen or press the Multi Selector in any direction to redisplay it.

• Inspect faces. When you magnify portraits, the picture-in-picture thumbnail displays a white border around each face. Rotate the Sub-command dial or tap a face in the thumbnail to scroll the display to show another face. Unfortunately, the camera sometimes fails to detect faces, especially if the subject isn't looking directly at the camera. When it works correctly, though, this is a pretty great tool for checking for closed eyes, red-eye, and, of course, spinach in the teeth.

While a photo is magnified, choose Quick Crop from the i-button menu (left) to create a new image that contains only the area visible in the zoomed view (right).