How to Use Continuous Lighting in Your Photography

By: Julie Adair King and
Updated: 03-12-2020
From The Book: Digital Photography For Dummies

Explore Book Buy On Amazon
Although flash is the most common form of artificial lighting, you do have another option: You can opt for continuous lights, which is a fancy term for photography lights that stay on all the time rather than emit light only when you press the shutter button.

Constant lighting gives you the advantage of being able to see in advance where and how the light is going to hit your subject, making it easier to get the light just right before you shoot. (Some flashes do offer a modeling flash feature, which outputs a blinking burst of light so that you can preview the flash, but it happens so quickly that it’s difficult to make a judgment on whether you’ve got things set up right or not.)

The downside to continuous lights is that they require either AC power or suck up battery juice like crazy — which makes sense, given the lights are drawing power, uh, continuously. Additionally, continuous lights that offer enough output to do the job well aren’t any less costly than a good external flash.

Today, you can get the benefits of constant lighting by buying products that use LED or fluorescent bulbs. Some of these lighting products are aimed primarily at videographers — movie recording requires constant lighting — but they can do dual duty for still photography. Some can even connect to your camera via a hot shoe, just like an external flash. The below image shows one such product, an LED light panel from Smith-Victor, which costs about $110. 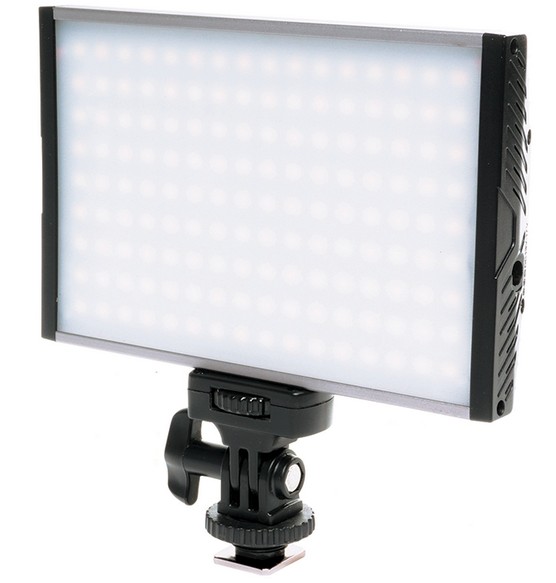 Courtesy Smith-Victor
This Smith-Victor LED light panel can attach to your camera via a hot shoe, offering continuous lighting on the go.

If your job or your passion requires shooting lots of formal portraits (such as corporate head shots) or product photography, you’ll want to put together a small, multiple-light studio. You don’t need to spend a lot of money or devote a large area for such a studio, and you’ll get far better lighting results in less time with the proper tools at hand.

The following image offers an illustration. The photographer used a regular, built-in flash to take the picture on the left, resulting in harsh shadows and uneven lighting. 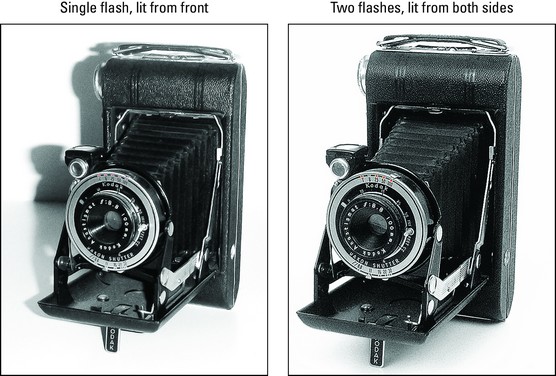 To get the result shown on the right, the multiple-flash setup you see in the next image was used.

To achieve the bright, shadow-free illumination all the way around the camera, cross lighting was used, which means one remote flash was placed to the left of the camera and another to the right. With cross lighting, the light from the left flash takes out the shadows cast by the right flash, and vice versa. 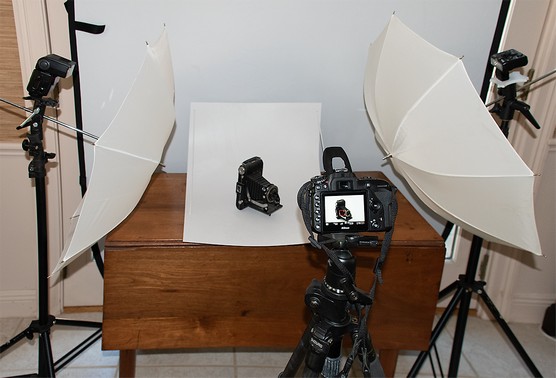 Here’s a list of the tools involved in the multiple-light tabletop setup:

Although this setup happens to feature Nikon products, many other camera and lighting manufacturers offer these same capabilities.

Behind a tabletop setup, you can place a large pop-up backdrop to block out light coming from two large French doors in the background. (It’s called a pop-up backdrop because it collapses and folds up into a small bag when not in use. When you remove it from the carrying case, it pops open to the full size.)

Obviously, this background isn’t a required element for tabletop photography. You can put your setup somewhere not impacted by window light.

A pop-up background is perfect if you want to raise your portrait photography game, however. The left image below shows tone setup for a portrait-shooting variation of a multiple-flash studio. All you have to do to change the setup is drag the table out of the way, move a small stool in front of the backdrop, and reposition the lights.

Also below, the lights are set up in a traditional portrait-lighting orientation, with one light set at about a 45-degree angle and above the subject and the other set directly to the side, at about the height of the subject’s face. 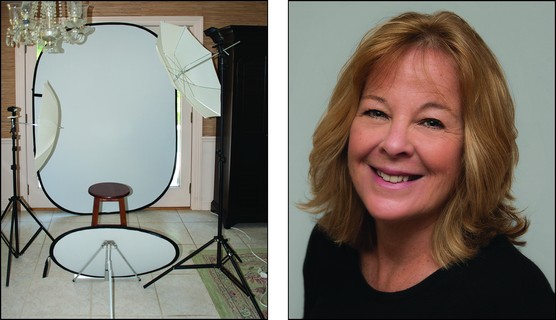 Here’s the portrait-shooting variation of the studio.

There’s one other product added to the mix: a tool called a reflector which is placed in front of the subject, resting it against a painter’s easel. The reflector catches some of the light from the remote flashes and bounces it upward towards the subject, helping to banish any shadows that might otherwise appear under the eyes and to soften shadowing under the chin and nose.

The right image above shows an example of the result of this lighting setup. Notice that the background, although white in real life, appears as a nice, soft gray in the photo. That’s because the background is far enough from the lights that it doesn’t become fully illuminated in the shot.

The best things about these setups — other than the benefits to images — it that teardown and storage is simple. The light stands and umbrellas collapse and go into a carrying bag. The pop-up background and reflector also fold up into their own carrying cases, and both flashes fit nicely in a camera bag. Everything is lightweight and compact enough to take to remote sites.

As for cost, the whole shebang was les than $500, minus the two flash units. The smaller, remote-only flash cost another couple hundred dollars.

You can use a similar setup with continuous lights, by the way. Just make sure that the light stands and diffusers you buy are compatible with the type of light you choose.

The multiple-light setups are absolutely not necessary if you have neither the space nor the budget for such solutions. You can shoot very nice shots of products you want to sell online, for example, with just your camera’s on-board flash — or no flash at all. All you need is a suitable backdrop and a way to drape it behind the object.

The image below shows an example. The backdrop is a black velvet skirt draped over a picture frame with the subject, a jade horse, in front of it. Again, the window that’s behind the table was blocked off using a pop-up portrait backdrop.

The jade horse is fairly reflective, so to keep light from shining on the surface, the window was blocked. For the same reason, the camera was placed on a tripod. That way, a shutter speed slow enough to expose the image using only ambient lighting coming through windows could be used. The resulting product shot appears on the right.

Here’s proof that you don’t have to invest in expensive lighting setups to take good product shots.

Don’t have a velvet skirt lying around? Really, any piece of plain or subtly patterned fabric will do. Other inexpensive and easily available background options are poster board and matte board, which you can pick up at any arts and crafts store.

Lighting, too, can be done on the cheap, even with a hardware-store clamp light — the kind that has a silver, reflective dish and a socket for installing a light bulb. Just be sure to buy a bulb that is as color neutral as possible so your photo colors aren’t affected by the light's hue.

You can also use clip-on LED office lights for simple desktop setups; the left image below gives you a peek at a makeshift stage created atop a file cabinet to shoot a still-life creation. Again, the backdrop is from the fabric-store remnant pile. The final photo appears on the right side.

Some final advice on this issue is that if you shoot a lot of small or medium-sized products and grow weary of having to hunt for backdrops and set up lights all the time, you may find it worthwhile to invest in a light box, which is a small, portable product-shooting solution. Many are simply soft, flexible cubes made out of translucent panels; you set your product inside and set up your lights outside the box. Then panels diffuse the light, helping to eliminate harsh shadows and reflection.

For even more convenience, some manufacturers offer an alternative solution that has an LED light panel set into the top of the box. The sides of the light box are made of black fabric or acrylic to help isolate your subject from ambient room light and thus are illuminated evenly by the cube’s own light.

One example of this type of product is the is the Fotodiox LED Studio-in-a-Box, shown below. Photographers like this design because of its flexibility: You can open the front of the box to shoot your subject from the front, or if you want to prevent any ambient light from hitting your subject, you can close the front panel and shoot through an opening on the top of the box.

The 28 x 28-inch version shown below sells for about $135 (Fotodiox,). It comes with four colored inserts that you can install if you don’t want a white background, and it folds flat into a compact package for storage. The other nice thing about this solution is that you don’t have to invest in or tote around separate lights as you do with a translucent tent. The only caveat is that the built-in light requires AC power.

Courtesy Fotodiox, Inc.
This product-lighting kit from Fotodiox has built-in LED lighting and enables you to shoot from the front of the box or through a small hole in the top.

Did you photo not turn out the way you were hoping? Try these ten fixes for common photo flaws.

Julie Adair King is a longtime Dummies author and photography instructor. She’s credited on over 40 books covering various Nikon, Canon, and Olympus cameras, as well as nine editions of Digital Photography For Dummies. When not writing, she teaches master classes in photography and photo retouching.