How to Expand Tonal Range with HDR on Your Nikon D5300 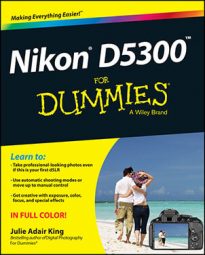 In the past few years, many digital photographers have been experimenting on their Nikons with a technology called HDR photography. HDR stands for high dynamic range — again, dynamic range refers to the spectrum of brightness values that a camera or another imaging device can record.

The idea behind HDR is to capture the same shot multiple times, using different exposure settings for each image. You then use special imaging software, called tone mapping software, to combine the exposures in a way that uses specific brightness values from each shot. By using this process, you get a shot that contains a much higher dynamic range than the camera can capture in a single image.

The D5300 offers a feature that provides automated HDR photography. When you enable this option, the camera records two images, each at different exposure settings, and then does the tone-mapping manipulation for you to produce a single HDR image. This feature is available only in the P, S, A, and M exposure modes.

So how is HDR different from Active D-Lighting — other than the fact that it records two photos instead of manipulating a single capture? Well, with the HDR feature, you can request an exposure shift that results in up to three stops difference between the two photos. That enables you to create an image that has a broader dynamic range than you can get with Active D-Lighting.

Here’s an example of the type of results you can expect. 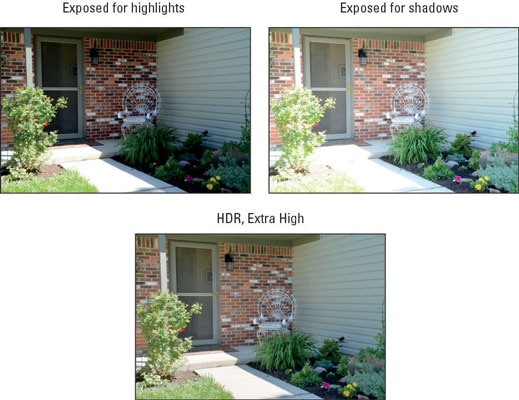 Before you try the HDR feature, note these important points:

If you want to produce the more-extreme type of HDR imagery that you see in photography magazines, you need to go beyond the two-frame, three-stop limitations of the in-camera HDR feature. Here’s an example created by blending five frames with a variation of five stops between frames. The first two images show you the brightest and darkest exposures; the bottom image shows the HDR composite.

On the other hand, the effect created by the camera's HDR tool looks more realistic because the tonal range isn't stretched to such an extent. When applied to its extreme limits, HDR produces something of a graphic-novel look. The example is pretty tame; some people might not even realize that any digital trickery has been involved. It has the look of a hand-tinted photo.

And of course, even though the in-camera HDR tool may not be enough to produce the surreal HDR look that's all the rage these days, you can still use your D5300 for HDR work — you just have to adjust the exposure settings yourself between shots and then merge the frames using your own HDR software.

You should also shoot the images in the Raw format because HDR tone-mapping tools work best on Raw images, which contain more bits of picture data than JPEG files.

All that said, the HDR feature is worth investigating when you're confronted with a high-contrast scene and you want to see how much you can broaden the dynamic range. Just take one shot with the feature enabled and a second with it turned off, and then compare the results to see which setting works best.

Both the Information and Live View displays include a symbol that tells you whether HDR is enabled. To adjust the setting, use these options:

Either way, frame your subject a little loosely; the camera may need to trim away the edges of the frame in order to perfectly align the two shots in the HDR image. When you press the shutter button, the camera records two frames in quick succession and then creates the merged HDR image. The message "Job Hdr" appears in the viewfinder as this digital manipulation is being accomplished.

Julie Adair King is a veteran photographer, author, and teacher. She is the author of several For Dummies books about Nikon and Canon dSLR cameras, with sales totaling more than 400,000 copies. She is also the bestselling author of all editions of Digital Photography For Dummies.