Explore Book Buy On Amazon
Photographing close-ups is a really fun way to express yourself as a digital single-lens-reflex (dSLR) photographer. You focus on smaller details than usual, which encourages you to grow creatively. Over time, you really do start to see things in a different light, whether the photo is of a flower, a bracelet, ice on a door, or a penny.

You don’t have to have anything besides a dSLR and a typical zoom lens to enjoy close-up photography. However, you can invest in macro lenses and other gear that will help you capture close-ups and macros more effectively. In this article, I share how I captured five of my favorite close-ups.

Not every close-up has to look as though you shot it with an electron microscope. Close-ups can be relatively relaxed if you like, as shown below. My wife was preparing food outside early one evening and the light was incredible. It was spring, and we were itching to be outside. Instead of cleaning off the table, I used her tools as props for the background. You can see a knife and a colander of radishes as well as a paper napkin strategically placed around the African violet. The placement of these items isn’t accidental. 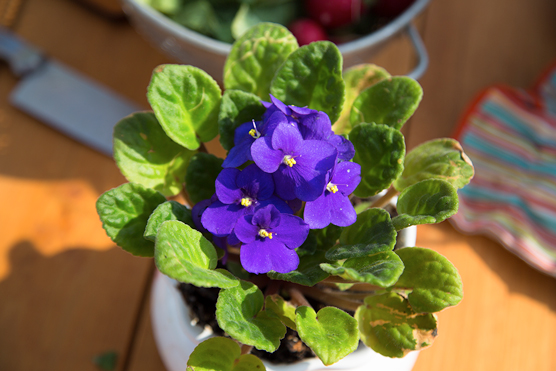 Quite often, shooting close-ups is just a matter of zooming in.

I used a professional Canon full-frame dSLR and lens for this photo. Overkill, possibly, but I can’t complain. I zoomed in to 73mm, which is in the near/medium telephoto range for a full-frame camera. Other than that, this was very close to a normal handheld shot. The aperture was f/4, shutter speed was 1/800, and ISO was only 100.

Be ready to grab your camera

When you see something interesting, be ready to get your camera and start photographing. Case in point: I noticed that ice had formed on one of our storm doors, as shown. It was December 24, and brutally cold. Fighting a bit of laziness, I put down my coffee and went to get a camera. I chose my consumer-level Nikon APS-C dSLR and put a nice 50mm prime lens on it. 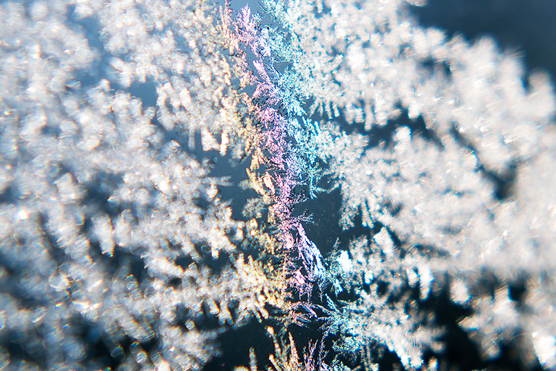 Always be on the lookout to photograph unique scenes closely.

I came back into the room and took a few test shots straight on. Boring. Bracing myself, I got closer and angled the camera so that I could capture an oblique shot. Interesting! I set the camera to aperture-priority mode and dialed in f/3.5 for this shot. The shutter speed was 1/2500 and the ISO was 100.

Now it’s time to unleash some extra equipment on you. I captured the close-up of the sunflower shown using a diopter attached to the lens of a consumer-level Canon dSLR. The lens wasn’t anything fancy, just your standard 18-55mm kit lens. Diopters magnify things, just as a magnifying glass does. They also enable you to move closer and still focus. Diopters are easy to carry and relatively inexpensive. They also work well with step-down rings, which means that you can buy large diopters and use them on many different lenses as long as you have a compatible step-down ring. I used 77mm diopters. 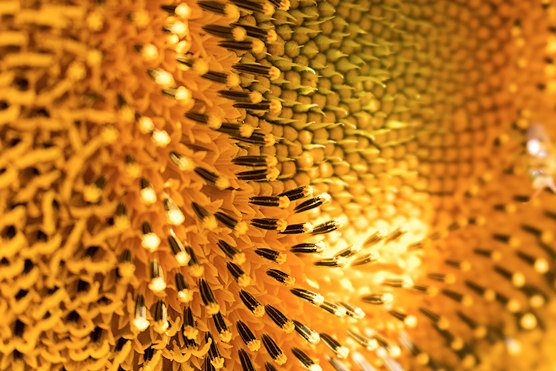 Diopters are an inexpensive but effective way to magnify subjects.

I took this amazing shot late in the day when the light struck the sunflower from the side. I zoomed in to 55mm and, with a +10 diopter attached, was able to capture a unique close-up. I used shutter-priority and set the shutter speed to 1/640 second. The camera set the aperture to f/6.3. Even at f/6.3, the depth of field is very narrow because of the close focus distance made possible by the diopter. The ISO rose to 640.

You’re going to laugh at this one. I was experimenting with reversing rings. They enable you to mount lenses on your camera backward, which turns normal lenses into close-up/macro lenses. I realize they aren’t everyone’s cuppa tea. You have to manually focus, aperture control can be a problem, and it’s just odd. However, I have some old NIKKOR manual focus lenses that work perfectly with reversing rings. I control the aperture on the lenses and mount them on Canon dSLRs.

I was looking for interesting subjects to photograph when I grabbed the turquoise bracelet shown. I bought it for my wife one year when I was on a trip to Texas. Curious, she followed me outside to help. We went around to the back of the garage and she held the bracelet over our black trash bin. It worked fantastically as a backdrop. She was able to steady her arm on it, which helped me focus and shoot a crisp photo. I used a Canon APS-C dSLR set to shutter-priority mode with an old 50mm NIKKOR manual focus lens set to f/2. The shutter speed was 1/250 second and the ISO was 200. 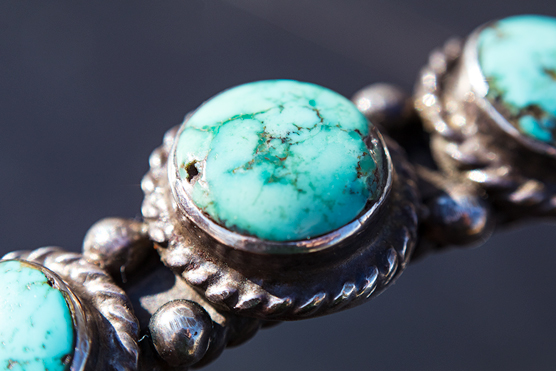 Use what you have to make every photo better.

Finally, I present President Abraham Lincoln. On a penny, of course. But wow, what a penny. This one has been through some rough times. It’s not the newest penny and has a lot of gouges on the surface. Those qualities make it the perfect subject for a close-up. 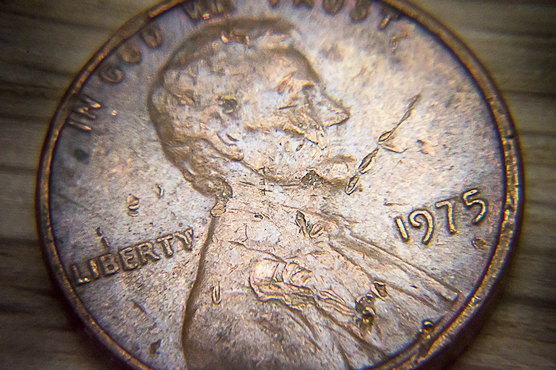 The small details on this penny are what make the shot interesting.

I shot this in my studio using a consumer-level Nikon APS-C dSLR in manual mode with a digital Holga lens attached. To increase the magnification, I used the 60mm macro attachment that pops on to the main Holga lens. I mounted the camera on a tripod and moved the penny, which I placed on a piece of wood, back and forth in order to focus. I used Live View to compose the shot and raised the ISO to 3200 to brighten the scene.

Even though the Holga lens has a small aperture, the depth of field of this shot is very narrow. I focused on the word Liberty and the date to make them the sharpest features. I took a number of test shots at different angles, and liked this one the best.