Explore Book Buy On Amazon
As a digital single-lens-reflex (dSLR) photographer, do not limit yourself or your creativity. What’s the point of limiting yourself? There isn’t one. Don’t let others tell you what your style should be or how to go about it. Measure your effectiveness by the end result. If it moves you, you’ve succeeded.

Always be on the lookout to photograph every type of subject, including people, landscapes, action, close-ups, and even quirky stuff like lion-head fountains, colorful artwork, and pie.

Finally, processing plays a vital role in photography. It always has. We forget how much effort Ansel Adams put into his art. He mastered a unique style of photography that continues to inspire us. He was not one-dimensional. The expression of his artistry included his planning, composition skills, approach to exposure, other mechanics, and, very importantly, how he developed his shots and made prints.

The photo is of a fountain at a nearby park. I am captivated by it to such a degree that I routinely photograph it with whatever new camera I have. It’s a fountain in the form of a lion’s head, cast in copper, and a basin. The lion and basin have a nice patina on them. The surrounding concrete has hints of differing texture and color. 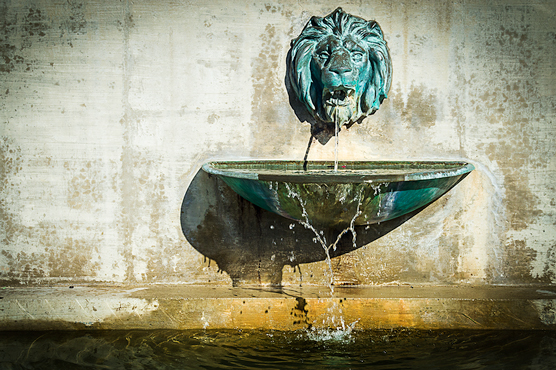 Return to your favorite scenes and continue to photograph them.

I took this shot early one October morning before the water was turned off for the winter. I set my Nikon APS-C dSLR on a tripod and framed this specifically so that the head was not in the center. I have photographed this scene in so many other ways that I was after a particular look. I used a small aperture, f/16, to get the entire head in focus. The dSLR camera set the shutter speed to 1/250 second and raised the ISO to 400 to get the right exposure. I processed the photo to emphasize contrast in the shadows.

Getting a new dSLR camera is always a fun experience. In this case, I splurged and got the better of the two available kit lenses, the Canon EF-S 18-135mm f/3.5-5.6 IS USM standard zoom lens. It’s versatile and takes great photos for a kit lens. I wanted to test the camera and lens, so I took them to campus, which offers a lot of interesting features in proximity. In a short time, I was able to walk around and photograph a number of different buildings, scenic vistas, people, and interiors.

This photo is one of the more striking shots I took that day. It’s a stained-glass art installation located on the east side of an academic building. I’ve taken photos of this subject before and was never that impressed by it. For some reason, I got behind it this time and framed the shot with the morning sun shining through the glass. That approach made all the difference in this photo. Rather than take a photo of it, I crouched down behind and took a photo through it. The sunlight brightens the glass and makes it a photo worth framing 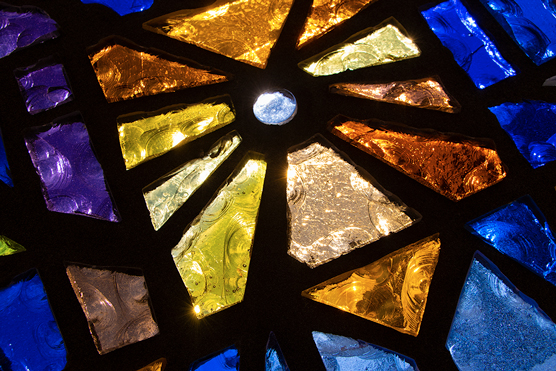 Always be on the lookout for creative opportunities.

Photograph bits and pieces of your life

And now for something completely different. The photo shown is of a delicious, homemade pie my wife baked late one February afternoon to cheer us all up and chase the winter doldrums away. It’s just a pie, right? Oh, but it’s more than that, which makes it perfect. 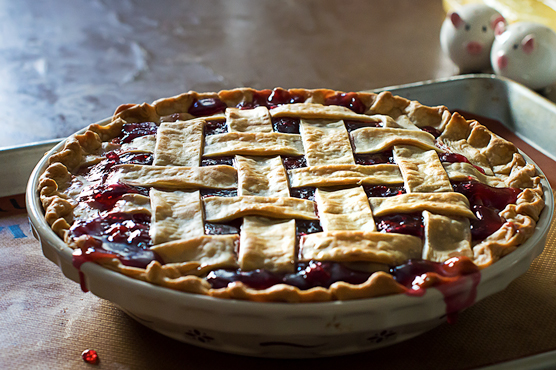 Use natural light whenever possible.

I shot this very casually. I walked into the kitchen, positioned the pie so that the natural light from the window illuminated it, and took a few test shots. I realized that our goofy pig salt and pepper shakers would add to the scene, so I put them in the corner of the frame. I left the drip in the front alone.

In the end, I think it’s a great food shot. Not something you would see in a recipe book where everything is pristine and nothing is out of place. However, this photo has an appealing homespun character that I love. I used a Nikon APS-C dSLR and 50mm prime lens set to f/5.6 for this shot. I didn’t set a wider aperture because I wanted more of the pie to be in focus. The shutter speed was 1/80 and the ISO rose to 1800.

I took this shot of the James Scott Memorial Fountain at Belle Isle Park, near Detroit, late one August afternoon. The sun was bright and the sky was blue, with a few clouds here and there. The wind blew the water from the fountain around, which makes photos of fountains more interesting. 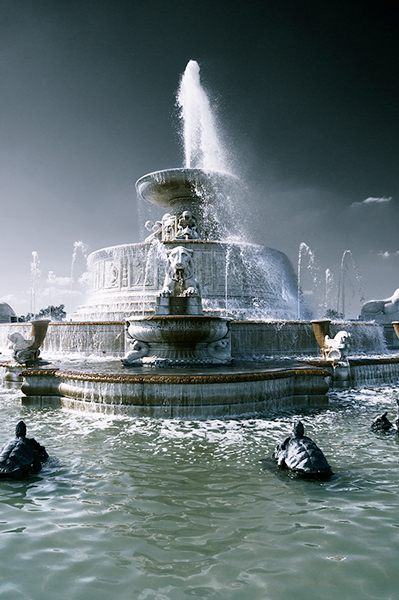 What I want to highlight about this photo are the processing decisions I made. I didn’t want a standard shot. I wanted it to look dramatic and bold. I tried oversaturating the photo, but that approach made it look worse. So I went the other direction and experimented with black and white. I realized at some point, however, that I didn’t want to convert it to pure black and white. I continued to experiment until I found something that I liked. I processed the foreground and background with different black-and-white settings, masked out the parts I wanted to hide, and then made those layers partially transparent. I kept the original color photo underneath, which gave the photo an interesting color tint.

I used a Sony APS-C dSLT with standard zoom lens set to 18mm. I had accidentally set the camera to Auto mode, but as Bob Ross of The Joy of Painting said, “We don’t make mistakes; we have happy accidents.” The aperture was f/11, shutter speed 1/200 second, and ISO was 100.

Push yourself to expand your boundaries

Finally, I want to share the interesting photo I took inside a local bank, shown in this figure. The bank (originally named Lincoln National Bank and Trust) was built in 1929–1930 and is well-known for its art-deco style. I spent a few hours inside the lobby one day shooting exposure brackets for high dynamic range (HDR) from numerous angles. Before I left, I went up to the second level, which overlooks the lobby below, and discovered this amazing scene. 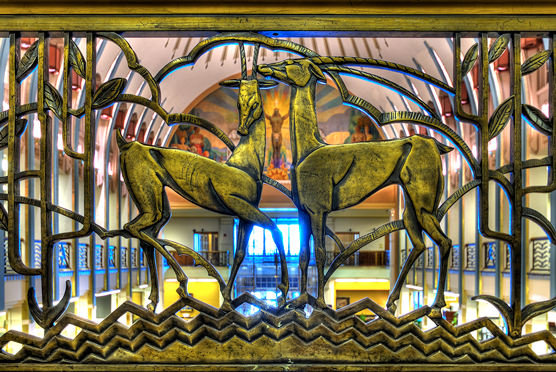 HDR photography enables you to capture many scenes with greater detail.

I set up my tripod and shot seven exposure brackets, each separated by 1.0 EV. I merged them into an HDR image and tone mapped it to achieve this relatively natural-looking appearance. I used a Nikon APS-C dSLR and ultra, wide-angle lens set to 20mm. The wide-angle focal length let me get close to the artwork. I set the aperture to f/5.6 and used an ISO of 100. The 0.0 EV bracket had a shutter speed of 1/2 second.