How to Use Face+Tracking Autofocusing on Your Canon EOS 80D 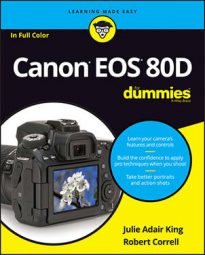 Explore Book Buy On Amazon
In the Face+Tracking mode, which is the default for both still photography and movie recording on your EOS 80D, the camera searches for faces in the frame. If it finds one, it displays a white focus frame over the face, as shown on the.

In a group shot where more than one face is recognized by the camera, you see arrows on either side of the focus frame. To choose a different face as the focusing target, tap the face or use the Multi-controller to move the target frame over the face.

The white frame represents the face chosen for focusing; the frame turns green when focus is achieved.

When the conditions are just right in terms of lighting, composition, and phase of the moon, this setup works fairly well. However, it has a number of “issues”:

If the camera can’t detect a face, it operates as it does when you use FlexiZone-Multi autofocusing, explained next.