Explore Book Buy On Amazon
When you press the shutter button halfway, the current f-stop, shutter speed, and ISO speed appear in the viewfinder display on your Rebel T6. This is where you will monitor your exposure settings. 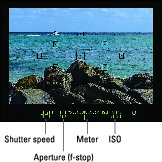 The shutter speed, f-stop, and ISO speed appear in the viewfinder.

Or if you’re looking at the Shooting Settings or Live View display, the settings appear. 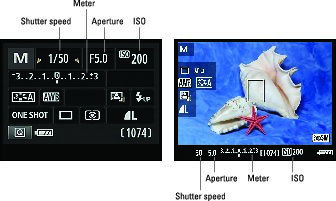 You also can view the settings in the Shooting Settings display (left) and Live View display (right).

It's easy to mix up the two values in the two displays that don't include the letter F to indicate the aperture setting. For example, a casual glance at the values shown at the bottom might lead you to think that both are set to 50. In fact, there's a tiny period between the second 5 and 0 (for f/5.0). But if your close-up eyesight is like mine, well . . . just remember that the f-stop always appears to the right of the shutter speed, whether you're checking settings in the viewfinder, the Shooting Settings screen, or Live View screen.

Of course, if you're new to exposure and the standard exposure metering system, those numbers don't mean much yet. So first things first: The numbers on the meter represent exposure stops. A stop is simply the photography term for an increment of exposure. To increase exposure by one stop means to adjust the aperture or shutter speed to allow twice as much light into the camera as the current settings permit. To reduce exposure by one stop, you use settings that allow half as much light. (Doubling or halving the ISO value also adjusts exposure by one stop.)

You also need to understand that the meter serves different functions depending on your exposure mode, as follows:

In manual exposure (M) mode, the meter indicates whether exposure settings are on target.

No matter what the exposure mode, the camera bases its exposure analysis on the metering mode, explained next.