The Lens of the Canon EOS Rebel T7i/800D

Explore Book Buy On Amazon
If you're never used a dSLR before, you may be unfamiliar with how to operate the lens on the Canon EOS Rebel T7i/800D. The following basics are specific to the 18–55mm kit lens sold with the T7i/800D, but they apply to many other lenses that support autofocusing with the camera. (You should explore the lens manual for specifics, of course.) 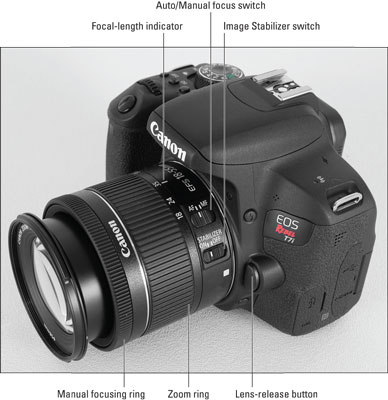 Here are a few features that may be found on your lens.

The 18–55mm kit lens is an EF-S lens with both image stabilization and stepping motor technology. Complete lens info can also be found on the ring surrounding the front element of the lens.