Correcting Colors with White Balance on Your Canon EOS 70D

Compared with understanding some aspects of digital photography, making sense of the Canon EOS 70D color options is easy-breezy. Color problems aren't all that common, and when they are, they're usually simple to fix with a quick shift of your camera's White Balance control.

Every light source emits a particular color cast. The old-fashioned fluorescent lights found in most public restrooms, for example, put out a bluish-green light, which is why our reflections in the mirrors in those restrooms always look so sickly. And if you think that your beloved looks especially attractive by candlelight, you aren't imagining things: Candlelight casts a warm, yellow-red glow that's flattering to the skin.

Science-y types measure the color of light, officially known as color temperature, on the Kelvin scale, which is named after its creator. You can see an illustration of the scale in the following figure. 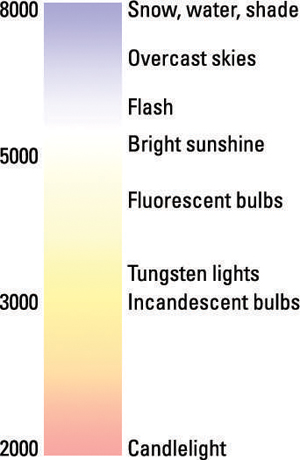 When photographers talk about "warm light" and "cool light," though, they aren't referring to the position on the Kelvin scale — or at least not in the way people usually think of temperatures, with a higher number meaning hotter. Instead, the terms describe the visual appearance of the light. Warm light, produced by candles and incandescent lights, falls in the red-yellow spectrum at the bottom of the Kelvin scale; cool light, in the blue-green spectrum, appears at the top of the scale.

Your camera's Automatic White Balance setting, which carries the label AWB, tackles this process remarkably well in most situations. In some lighting conditions, though, the AWB adjustment doesn't quite do the trick, resulting in an unwanted color cast like the one you see in the left image in the figure below. 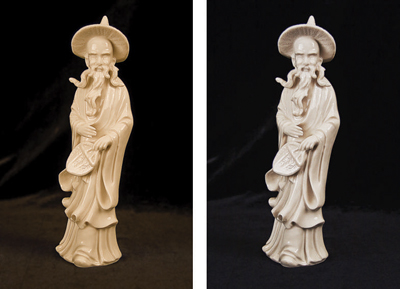 Problems most often occur when your subject is lit by a variety of light sources. For example, the figurine in the above figure was shot under a mix of tungsten photo lights and strong window light. In Automatic White Balance mode, the camera didn't properly account for the mixed light, giving the original image a yellow tint. Switching to the Tungsten Light White Balance setting did the trick. The right image in the figure shows the corrected colors.

Unfortunately, you can't access the White Balance setting in any of the point-and-shoot exposure modes, although you can sometimes address color issues via the Shoot by Lighting or Scene Type setting when you shoot in a couple of the scene modes. So if color problems arise, shift to an advanced exposure mode and take advantage of the White Balance solutions.