Controls on the Back of the Canon EOS Rebel T7i/800D

Explore Book Buy On Amazon
Traveling over the top of the Canon EOS Rebel T7i/800D camera to its back, you encounter the smorgasbord of controls shown in the following figure. 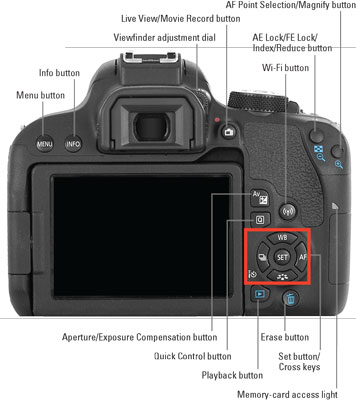 Some buttons have multiple "official" names because they serve multiple purposes depending on whether you're taking pictures, reviewing images, recording a movie, or performing some other function. This book refers to these buttons by the first label you see in the following list to simplify things. Again, though, the margin icons show you exactly which button to press.

Starting at the top-right corner of the camera back and working westward (well, assuming your lens is pointing north, anyway), here's an introduction to the buttons and other controls on this side of the camera: