A fast shutter speed is the key to capturing a blur-free shot of a moving subject, whether it's a spinning Ferris wheel, a butterfly flitting from flower to flower, or a hockey-playing teen. In the first image below, a shutter speed of 1/125 second was too slow for the Canon EOS 70D to catch the subject without blur. For this subject, who was moving at a fairly rapid speed, a shutter speed of 1/1000 second was needed to freeze the action, as shown in the second figure below. (The backgrounds are blurry in both shots because the camera settings used produced a shallow depth of field; in the first image below, the skater is a little farther from the background, blurring the background more than in the second image below.) 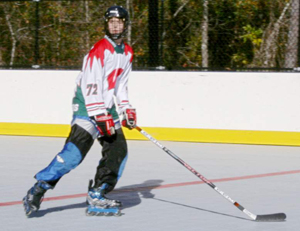 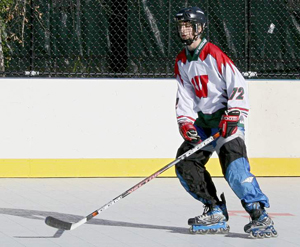 Raising the shutter speed to 1/1000 second froze the action.

Try the techniques in the following steps to photograph a subject in motion:

These action-shooting strategies also are helpful for shooting candid portraits of kids and pets. Even if they aren't running, leaping, or otherwise cavorting when you pick up your camera, snapping a shot before they move or change positions is often tough. So, if an interaction or scene catches your eye, set your camera into action mode and then just fire off a series of shots as fast as you can.

One other key to shooting sports, wildlife, or any moving subject: Before you even put your eye to the viewfinder, spend time studying your subject so that you get an idea of when it will move, where it will move, and how it will move. The more you can anticipate the action, the better your chances of capturing it.