When you select the Custom Functions menu on your Canon EOS 70D, which is available only when the Mode dial is set to P, Tv, Av, M, B, or C, you delve into submenus containing advanced camera settings. Navigating these screens involves a few special techniques.

Initially, you see the screen shown in the following figure. Some explanation may help you make sense of it: 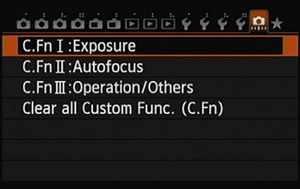 To scroll from one Custom Function to the next, tap the left or right scroll arrow at the top of the screen, rotate the Quick Control dial, or press the Multi-controller left or right. When you reach the setting you want to adjust, use either of these techniques:

To exit the Custom Function screens, press the Menu button or tap the Menu icon in the lower right of the screen (see the left screen in the above figure).