3 Ways to Play with Special Effects on the Nikon D7500

Explore Book Buy On Amazon
In addition to practical photo-correction tools, the Retouch menu on the Nikon D7500 offers some special-effects tools. You also can add effects as you shoot by using the Effects exposure mode.

The Miniature Effect filter works best if you shoot your subject from a high angle — otherwise, you don't get the miniaturization result.

This tool is not only less than intuitive to use, but also makes it difficult to precisely adjust only specific parts of the image. Have fun experimenting, but realize that to create this effect successfully, you need to do the job in a photo-editing program that enables you to select the parts of the photo you want to change. 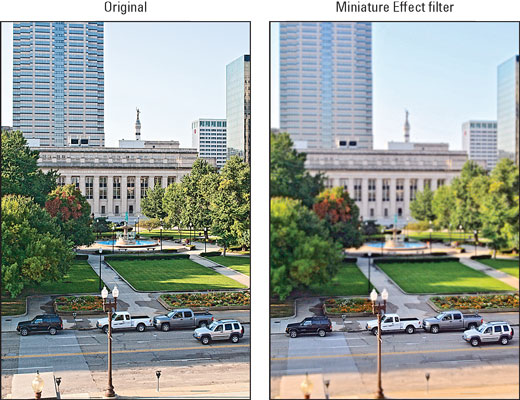 The Miniature Effect filter throws all but a small portion of a scene into very soft focus.

When you set the Mode dial to Effects, as shown here, you can apply special effects while shooting. 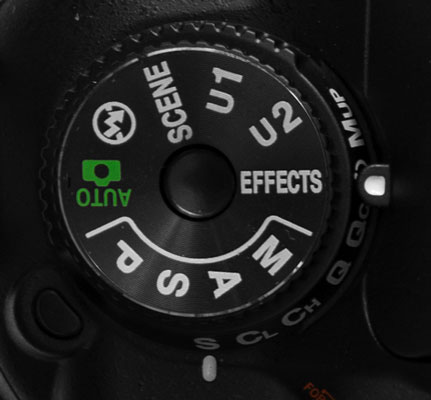 Shooting in Effects mode also brings up a problem: To create the effects, the camera puts most picture-taking controls, such as White Balance and Metering mode, off-limits. For most effects, you also must choose one of the JPEG Image Quality settings; Raw shooting is unavailable except when you choose the Silhouette, High Key, or Low Key effects.

The best way to take advantage of Effects mode is to turn on Live View. You have to use Live View to shoot movies anyway, but it's beneficial for still photography, too. Several effects offer settings you can tweak to alter the result, and you can get to those settings only in Live View mode. Live View also enables you to preview the selected effect. 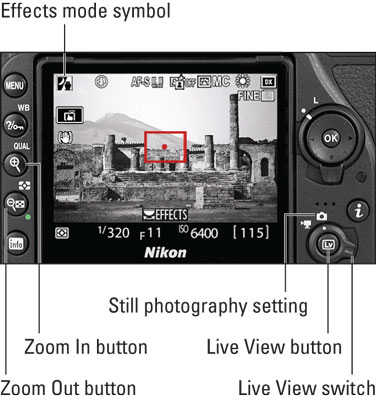 Set the camera to Live View mode to access Effects mode adjustments or to apply effects when recording movies.

As soon as you set the Mode dial to Effects and engage Live View, an icon representing the currently selected effect appears in the upper-left corner of the display, as shown here. To choose a different effect, rotate the Main command dial. A ribbon containing icons representing each effect appears near the top of the screen, as shown on the left. To scroll through the available effects, rotate the Command dial. The preview updates each time you scroll to a new setting.

Rotate the Main command dial to scroll through available effects (left); the OK Set symbol tells you that you can adjust the impact of the effect (right).

If an effect offers tools for altering the final look of the image, you see an OK Set symbol near the bottom of the frame, as shown in the figure.

When you find an effect you like, press the shutter button halfway and release it to return to shooting mode. If an effect offers adjustments, tap the OK Set symbol or press the OK button to display a screen containing the adjustment controls. For example, the Photo Illustration effect offers the single control shown on the right. As you change the setting, the preview updates to show how the new setting affects the image. Usually, you adjust options by moving a marker along a bar like the one shown in the figure. Press the Multi Selector right to make that happen. You can also tap the bar to place the marker at the spot you tap.

After making your adjustments, tap OK Done or press OK to return to the live preview. (If you see the OK Set sign on the preview, you can tap it at any time to readjust the effect settings.)

Now for a review of the various effects:

Autofocusing is not available during movie recording in this mode. Additionally, the resulting movie looks more like a slide show made up of still images than a standard movie.

To set up this effect, press OK or tap the OK icon to display horizontal markings that indicate the width of the sharp-focus region. Use the Multi Selector or touchscreen controls at the bottom of the screen to adjust the width and position of the in-focus region. When you achieve the look you want, press or tap OK again.

A few limitations apply: Flash is disabled, as is the AF-assist lamp. If you use the Continuous Release mode, the frames per second rate is reduced. When autofocusing, you can't use any AF-area mode except Single-point.

For movies, sound recording is disabled, autofocus is disabled during recording, and movies play back at high speed. (The high-speed playback means a movie that contains about 45 minutes of footage is compressed into a 3-minute clip, for example.)

After selecting an effect and setting any adjustments available for the effect, you can exit Live View to take the picture using the viewfinder if you prefer. To record a movie, remain in Live View mode and press the red movie-record button on top of the camera to stop and start recording.

2 roads to a multi-image exposure

On the surface, both options sound cool. The problem is that you can't control the opacity or positioning of the images in the combined photo.

However, there is one useful effect that you can create with either option: a "two views" composite like the one here. For this image, Image Overlay is used to combine the front and rear views of the antique match striker into the composite scene.

If you want each subject to appear solid, use a black background and position the subjects so that they don't overlap.

For this trick to work, the background in both images must be the same solid color (black seems to be best), and you must compose each photo so that the subjects don't overlap in the combined image, as shown here.