Beyond the Top 10 Horse Breeds: Crossbreds and Draft Breeds

Explore Book Buy On Amazon
Not all breeds have substantial numbers of horses in their ranks. Plenty of smaller, lesser-known breeds exist and are popular among certain factions of the horse world. These types of horses have characteristics that set them apart and make them attractive to people who want something specific from their horses.

Although purebreds are the name of the game for many people, some prefer crossbred horses. Crossbred horses possess characteristics from both of the breeds in their parentage, which is why some people prefer them to purebreds. They believe they’re getting the best of two breeds instead of one.

Other crossbreds can be the result of experiments conducted by individual breeders and can feature any two breeds that someone decided to put together. Crossbreeding has been a staple of the equine industry for centuries and has resulted in the development of a number of pure breeds. It also results in grade horses, which are the well-loved mutts of the equine world (see the nearby “Making the grade horse” sidebar).

Draft horses are living relics of humanity’s agricultural past. Originally bred for hundreds of years to pull heavy loads, draft breeds were used only until recently to work farms around the globe. When motorized tractors replaced draft horses in agricultural society, these magnificent creatures nearly died out. The work and dedication of people who love these horses saved draft horses from sure extinction.

Today, draft horses are used mostly for showing and exhibition, although some still are used to work small farms and perform other hauling jobs not suited to trucks and tractors. Draft horses are also ridden, and because of their docile temperaments, make wonderful — if not rather large — companions.

Although draft horses still are considered rare, you can find several breeds of them in North America. Each of the breeds in the following sections has an American registry and a good number of devotees in various countries.

American Belgians differ somewhat from their European counterparts. Belgians in the United States are larger, heavier horses than those seen in the breed’s native country. American Belgians stand around 18 hands and are mostly seen in one coloration: sorrel with a flaxen (blond) mane and tail. 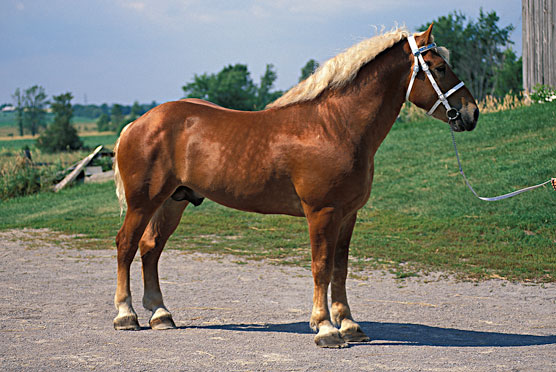 These days, Belgians are used primarily in the show ring and for pulling contests. Some Midwestern American farmers still use Belgian teams to work their fields, as do many of the Amish in the United States. You can see a Belgian in the color section.

The Clydesdale probably is the most well-known of all the draft breeds, thanks to Anheuser-Busch. Clydesdale horses have been pulling the Budweiser beer wagon for decades, and are regularly seen in the company’s TV commercials and in exhibitions around the country.

Clydesdales usually come in a bay coloration, although they can also be seen in chestnut, black, brown, and roan. These horses can be anywhere from 16.1 to 18 hands in height. They have wonderful dispositions and are often used for riding as well as pulling.

The Gypsy Horse is also known as the Gypsy Vanner and the Gypsy Cob, depending on which registry you look at. This stunning, small draft horse traces its roots to the Traveler people of the United Kingdom, who used this horse to pull their colorful wagons from town to town in the 1800s. The breed became known in the U.S. in the 1990s and has become well known for it’s striking markings, long mane and tail, and feathered — that is, hairy — legs.

Gypsy Horses make good riding horses because of their smaller size, and they are often used for trail riding, parades, and horse shows. They are most often seen in black and white, but they actually come in a variety of horse colors.

Percherons are seen only in gray or black, and average around 16 hands in height — a little on the short side for a draft horse. What they lack in height, they make up for in bulk. They are strong and stocky horses.

You can ride Percherons or use them to pull carts and wagons; this breed is shown extensively in the United States. They’re known for having calm personalities and being trainable.

Shires are attractive horses with heavy feathering around their fetlocks (ankles) and long fuzzy beards on their jaws. They are medium height for a draft breed, measuring anywhere from 16 to 17.2 hands.

Shires are shown in harness and at halter in the United States and in other countries. The breed is often seen pulling beer wagons at events in Great Britain, and some people still use Shires to haul goods in other parts of the world.

The Suffolk Punch, or simply Suffolk, is a smaller draft horse, measuring in at around 16 hands. An unusual aspect to the breed is its single color; Suffolks only come in chestnut (which devotees of the breed spell chesnut in the archaic way).

Suffolks are still used to do field work and pull wagons for exhibitions, but they’re also shown and ridden.

Audrey Pavia is the former editor of Horse Illustrated magazine and an awardwinning freelance writer specializing in equine subjects. She has authored articles on various equine topics in a number of horse publications, including Western Horseman, Horses USA, Thoroughbred Times, Appaloosa Journal, Paint Horse Journal, Veterinary Product News, and USDF Connection magazines. She has written five horse books besides Horse Health & Nutrition For Dummies, including Horses For Dummies, 2nd Edition (Wiley), Horseback Riding For Dummies (Wiley), and Trail Riding: A Complete Guide (Howell Book House).
In addition to her experience as an equine writer, she’s also a former Managing Editor of Dog Fancy magazine and a former Senior Editor of the American Kennel Club Gazette. She has authored more than 100 articles on the subject of animals and has written several books on various kinds of pets.
Audrey has been involved with horses since the age of 9. She has owned and cared for horses throughout her life, and has trained in both Western and English disciplines. She currently participates in competitive trail riding. Audrey resides in Norco, California.

Kate Gentry-Running, DVM, CVA, is a practicing veterinarian with 27 years of experience and an emphasis in equine integrative medicine. She has a particular passion for educating horse owners.
Dr. Running received her veterinary degree in 1980 from the University of Missouri College of Veterinary Medicine. She was certified by the International Veterinary Acupuncture Society in 2001 and is currently pursuing a Master’s degree in Traditional Chinese Veterinary Medicine at the Chi Institute in Gainesville, Florida.
Dr. Running breeds and trains cutting horses at her ranch in Tolar, Texas.