By: Julie Gauthier and Rob Ludlow and
Updated: 03-27-2016
From The Book: Chicken Health For Dummies

During the postmortem exam of a chicken, you should evaluate the internal organs first. Then, move on to the head and neck, following by the joints and nerves. To inspect these items and finish up your chicken necropsy, follow these steps:

Turn the bird around to face you. 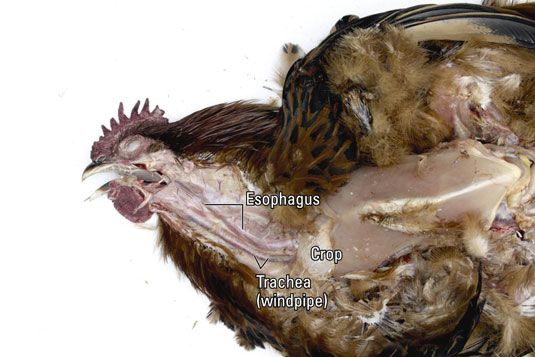 Use your scissors and cut through the corner of the mouth. Keep cutting through the skin down the neck toward the chest, to expose the trachea, esophagus, and the crop. The trachea (windpipe) is the stiff tube that looks a little like a drinking straw. The flat, pink tube running alongside the trachea is the esophagus, which carries swallowed food to the stomachs.

If you follow along the esophagus to where it enters the chest cavity, you find an enlargement, or pouch, in the esophagus, which is the chicken’s crop.

Cut open the esophagus along its length, all the way down to the crop.

Look for food or indigestible stuff that the chicken shouldn’t have eaten. You can rinse the crop with water to get a clearer view of the lining. A roughened, towel-like appearance of the inside of the crop is a sign of a yeast infection called candidiasis.

View the lining inside the trachea by cutting it lengthwise.

Blood, cheesy material, or lots of mucous are evidence of a respiratory infection. If a chicken has a gapeworm infection, you find the reddish worms here, attached to the lining of the trachea.

Turn the bird around to its original position with its feet toward you. Find the large sciatic nerve that runs along the inside of each upper thigh, under the thigh muscle. 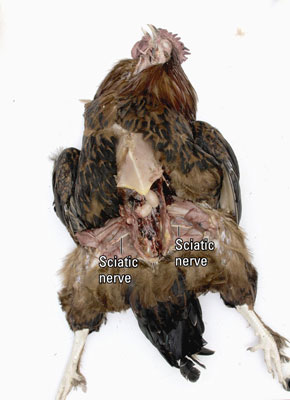 The nerves should be smooth and symmetrical. An enlargement of a sciatic nerve is one indication of Marek’s disease.

Inspect the leg joints for swellings.

Cut the leg joints open with your scissors. The joints’ surface should be smooth with some clear, sticky joint fluid. Blood, pus, or cloudy fluid in the joint is a sign of infection.

Properly dispose of the carcass and tissues.

Used paper towels and gloves can go in the trash, but make sure animal scavengers (including your live chickens) can’t get into the trash receptacle.

Clean and disinfect the table, your scissors, and your hands.