By: Julie Gauthier and Rob Ludlow and
Updated: 06-14-2021
From The Book: Chicken Health For Dummies

Explore Book Buy On Amazon
Following are the most common questions that flock keepers ask about the health of their chickens. We provide quick, concise answers that you can take to heart or share with a fellow flock keeper in the time it takes you to check out at the feed store.

What is that lump on the side of a chicken’s neck? 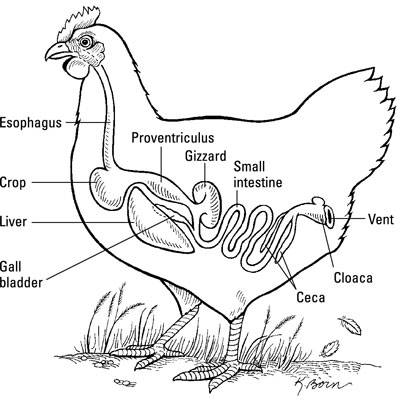 Most likely, the lump on the side of your chicken’s neck is normal. That’s her crop, an expandable pouch in the esophagus of chickens and many other types of birds that is part of the digestive system. Think of that anatomical feature as a doggie bag — a place for the foraging hen to store her edible discoveries for digestion sometime later in the day.

Rarely, a chicken’s crop plugs up because she’s eaten a lot of indigestible stuff, such as straw, wood chips, or long, stemmy weeds. This condition is known as a crop impaction, and it can be serious. If you’re concerned that the hard lump may be an impaction, feel the chicken’s neck early the next morning, before she has eaten breakfast. The lump should be gone, and her throat should feel soft and empty.

Why is a chicken losing her feathers?

Molt happens. Each year, usually in autumn, a chicken loses her old feathers and grows a new set, in an orderly process called molting. Most hens slow down on egg production or quit laying eggs altogether while they’re molting. Some hens molt quickly and get it over with in two to three months, although others can take as long as six months to freshen their appearance.

If your chicken is losing her feathers, suspect molt first.

Other common causes of feather loss include feather pecking (flock mates are plucking out feathers) and external parasites (mites or lice, usually). You may be able to blame the hens’ bare backs on the rooster’s attention — he’s scratching feathers out during mating.

Why do some eggs have soft shells or no shells?

Stress is the number one cause of abnormal eggshells in hens, including soft or shell-less eggs. Events that stress hens are disturbances that are likely to bother you, too. Moving to a new home, meeting a guest’s rambunctious dog or child, hot weather, or a sudden and violent storm are common stressors for chickens. A single disturbance can affect a flock’s egg production for a couple of weeks.

Besides stress, other explanations may fit. Older hens and hens that have been in lay (producing eggs) for many months are more likely to lay soft-shelled eggs. Viral infections can also mess up a hen’s egg-laying machinery, sometimes permanently.

How do you treat a chicken’s skin wounds?

The most common backyard chicken wounds are the result of predator attacks, flock-mate aggression, and entanglement or impalement by something sharp in the chicken yard, such as broken wire fences or protruding nails.

Treat predator bite wounds and other skin wounds as soon as you discover them.

Thoroughly flush the wound with an antiseptic solution.

Isolate the injured bird from the rest of the flock and let her take care of the wound herself.

Talk to your veterinarian before medicating a chicken with an antibiotic.

What causes your chicken to have runny poop?

Having loose droppings can be normal if they’re intermittent with normal, formed poop. Two or three times a day, a chicken empties the contents of the ceca, which are two blind pouches in the lower part of the digestive system. The cecal droppings are loose, brown, very smelly, and completely normal for chickens.

If all the chicken’s droppings are runny, however, that’s abnormal, so look for a health problem. Heading the list of possibilities for adult bird diarrhea is hot weather, which is a very common reason for laying hens to have loose droppings. Take this sign as a warning to ease the flock’s heat stress.

Yes, you should feed your chicks medicated starter feed, except under two conditions: your chicks were vaccinated for coccidiosis or you’re trying to raise chickens under organic conditions.

The medication in medicated chick starter is a coccidiostat, a drug that helps prevent coccidiosis, a common disease that can be fatal. Before the invention of coccidiostats, raising chicks without losing some to coccidiosis was a big challenge for flock keepers.

Is it safe to eat a hen's eggs after you medicated her?

What are these bugs crawling on your bird (and you)? 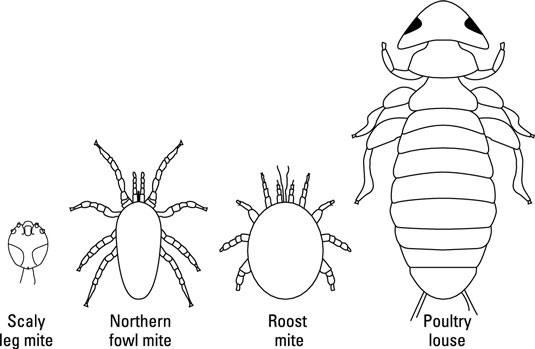 They’re lice or mites, almost certainly. These extremely common external parasites feed on your chickens, irritating and weakening them. Lice and mites can crawl on you, too, if you handle infested birds. Although chicken lice think people taste disgusting (they won’t hang around for long), mites will happily bite a person before running back to their preferred host — your chicken.

What is causing your hen’s swollen foot and her limping?

Bumblefoot is a common infection of the feet of poultry, usually discovered as a swollen, scabby foot pad. The problem starts with minor trauma to the foot, such as a bruise, scrape, cut, or puncture. Bacteria invade the small foot wound and create a big mess, causing pus-filled abscesses, swelling, and pain. Treatment isn’t quick or easy, and it usually requires repeated draining and cleaning the wound.

Can you feed bugs and worms to your flock?

Bugs and worms are yummy and nutritious (for your chickens). A chicken isn’t a vegetarian by nature, and she relishes a nice, juicy bug, which is typically loaded with nutritious fat and protein.