Explore Book Buy On Amazon
No one knows for certain what's causing CCD and killing off so many honey bees, at least not at the time of this writing. But researchers have managed to dismiss some "wild" theories and are now focusing on other, more probable causes. In all likelihood, CCD is not due to a single factor.

There was a well-publicized theory that the explosion of cellphone usage was causing CCD. Could it be? The short answer is no.

A small study done in Germany seemed to indicate that a particular type of base station for mobile phones could screw up honey bee navigation. But, despite all the media attention that this study received, it had nothing to do with CCD. The researcher who conducted the study told the Associated Press that there is "no link between our tiny little study and the CCD-phenomenon . . . anything else said or written is a lie." The scientists studying CCD agree. Case closed.

It may be the perfect storm

Far more likely it is not one single thing that is causing CCD, but rather a brew of many different challenges that have contributed to this problem. In a nutshell, several potential causes are being studied by scientists around the world: parasites (such as mites), pathogens (disease), environmental stresses (which include pesticides), and management stresses (including nutrition problems). If CCD is a combination of factors, it makes investigating the root cause especially complex. There are so many variables!

Although this is not a complete list of what's being studied, here are some of the more significant ingredients to this dire cocktail.

The spread of Varroa and tracheal mites has seriously affected honey-bee health in the United States and around the world. Varroa had nearly wiped out honey bees in the wild (feral hives), although these populations are now recovering. Both mites have put a major stress on our honey bees and could certainly make our girls far more susceptible to some of the other causes being studied. 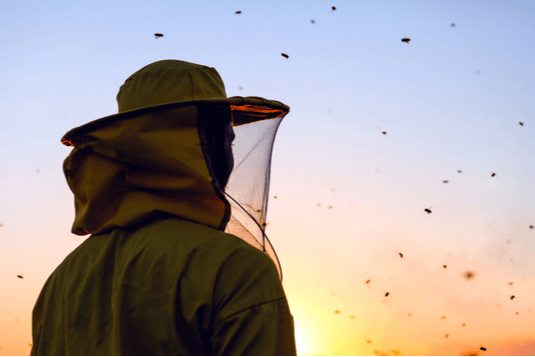 The Varroa mite has been shown to spread several different viruses among honey bees as it feeds on adult and pupal bees. Although many different viruses can impact honey-bee health, a few in particular are being studied in connection with CCD.

One is Israeli acute paralysis virus (IAPV). This particular virus is not necessarily the cause of CCD, but is more likely one ingredient to that cocktail that might trigger CCD. This research is being headed by Dr. Diana Cox-Foster at Penn State College of Agricultural Sciences.

Deformed wing virus seems to have increased in its prevalence and is one that appears particularly deadly to honey bees.

Another virus that recently gained attention is called tobacco ringspot virus (TRSV). Researchers have found this virus (that typically infects plants) has been systemically infecting honey bees. The rapidly mutating virus jumped from tobacco plants to soy plants to bees. The study provides the first evidence that honey bees exposed to virus-contaminated pollen can also be infected and that the infection becomes widespread in their bodies. Researchers state that honey bees can transmit TRSV when they move from flower to flower during the pollination process. The virus may be causing systemic infection in honey bees.

This is all sounding gloomy and overwhelming. But rest assured that smart people are working diligently on remedies. Researchers are exploring the ways in which these viral cocktails not only travel and migrate, but how they systemically infect the bodies of honey bees and lead to the eventual collapse of hives.

Another factor in bee loss is pesticides. Researchers have found higher-than-expected levels of miticides (used and sometimes misused by beekeepers to control mites) plus traces of a wide variety of agricultural chemicals in the pollen and wax of inspected hives.

Some believe that pesticides, especially a relatively new class called neonicotinoids, may have a role in CCD. Neonicotinoids are known to be toxic to bees. They can impair olfaction memory, motor activity, feeding behavior, and the bees' navigation and orientation. Neonicotinoids and some fungicides are synergistic, meaning that after exposure to one type of chemical, subsequent exposure to another chemical results in a far more toxic situation.

What is suspected — and probably the most damaging — is the sublethal or chronic effect of neonicotinoids. Exposure to continued levels of pesticides over time may render the bees weakened and thus more susceptible to viral infections that can then decimate the colony. It is like two body blows; the bees just can't take the one-two punch. All in all, this is some nasty stuff. Pesticide involvement in CCD remains a strong possibility.

Most pesticides that are acutely toxic to bees kill the adults, first foragers, and sometimes the hive bees. The foragers die in the field. With some chemical pesticides, large numbers of dead bodies may be evident at the front of the hive (see the figure). A small number of pesticides are even more damaging when they are brought back to the hive in contaminated pollen, causing death of the nurse-aged bees and the brood, which are then not adequately tended to because of fewer nurse bees. Adult bodies and brood pile up quickly and in large numbers in front of the entrance or on the bottom board. Colonies may lose a whole generation of brood rearing, setting back the development of the expanding colony.

CCD, on the other hand, is different. No dead bodies are found in or around the hive. The bees die away from their hive. 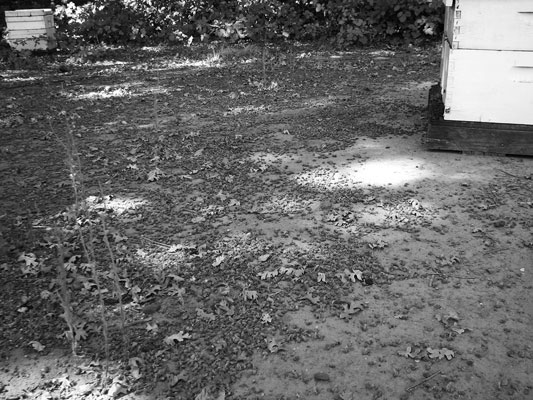 The huge pile of dead bees in front of this hive is a telltale indication of pesticide poisoning.

A host of other possible causes is now under study, including the following: The nutritional factor, resulting in stress on bees, seems to be a factor in weak colonies or colonies not developing properly. This can be because of loss of weeds in agricultural fields (because of increasingly heavy use of herbicides), monocultures of only single flowering sources for bee nutrition (as when the bees are involved in commercial pollination), effects on the bees' intestinal microflora (because of heavy reliance on artificial feeding of colonies), and decreasing natural forage (because of human disturbance of the habitat where bees need to forage). Bees that are weakened because of one or more of these factors may become vulnerable to the other factors.

All in all, honey-bee colonies are suffering from a toxic whammy of multiple negatives.