What to Do the First Week after Setting Up Your Beehive

A new beekeeper must wait one full week before opening his brand-new beehive. The colony needs this first uninterrupted week for accepting its new queen. Any premature disturbance to the hive can result in the colony rejecting her. The colony may even kill her, thinking the disturbance is somehow her fault.

Play it safe and leave the hive alone for one week. During that time, worker bees eat through the candy plug and release the queen from her cage. She becomes the accepted leader of the colony.

Conduct your first inspection on a mild, sunny day with little or no wind. As always, visit your hive sometime between 10 a.m. and 5 p.m.

Verifying that the queen bee was released

When you reach the two frames sandwiching the queen cage, look down in the hole where the candy plug was. If the candy is gone, that’s wonderful! It means worker bees have opened the cage and released the queen. Remove the cage and peek inside. Confirm that the queen has been released. Place the cage near the entrance so that any worker bees that you find exploring in the cage find their way back into the hive.

You’re likely to find that industrious bees have built lots of burr comb (sometimes called natural comb, wild comb, or brace comb) in the gap created by the queen cage. You may find comb on and around the queen cage itself. Although the burr comb is a beautiful bit of engineering, you must remove this bright white comb of perfectly symmetrical cells. Failing to do so is sure to create all kinds of headaches for you later in the season.

Using your hive tool to sever the burr comb where it’s connected to the frames, slowly lift the comb straight up and out of the hive. You’ll probably find it covered with worker bees.

Removing the bees from this burr comb is essential. One or two good shakes dislodge the bees from the comb. Shaking bees loose is a technique that will come in handy many times in the future.

Shaking is a sharp downward motion with an abrupt halt just above the hive. 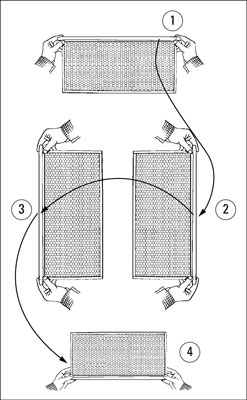 Shaking bees off frames is a technique you will use often.

Looking for eggs in your bee hive

When eggs are present, you know the queen already is at work. That’s all you need to find out on this first inspection. Close things up, and leave the bees alone for another week. Be satisfied that all is well. Because the weather likely is still cool, you don’t want to expose the new colony to the elements for too long.

If no queen or eggs can be found, you may have a problem. In this abnormal situation, wait another few days and check once again. Seeing eggs is evidence enough that you have a queen, but if you still find no evidence of the queen, you need to order a new one from your bee supplier. The colony will do okay while awaiting its new queen, which you’ll introduce exactly as you did the original: by hanging the cage between two frames and leaving the bees alone for a full week.

Replacing the tenth frame of your hive

The tenth frame is the one that you removed when you originally hived your package. It now becomes your wall frame.

When necessary, replenish your hive-top feeder with more sugar syrup.