What to Do in Your Beehive’s Second and Third Weeks

During the beekeeping inspections that you conduct two and three weeks after hiving your bee colony, you’re trying to determine how well the queen is performing. Following standard procedure, smoke, open the hive, and remove frames one by one for inspection. Work your way toward the center of the hive. As always, look for eggs. They’re your ongoing assurance that the queen is in residence.

Note that the bees have drawn more of the foundation into honeycomb. They work from the center outward, so that the outer five to six frames haven’t likely been drawn out yet. That’s normal.

By the second week, you can easily see larvae in various stages of development. They should be bright white and glistening like snowy white shrimp! Looking closely, you may even witness a larva moving in its cell or spot a worker bee feeding one. 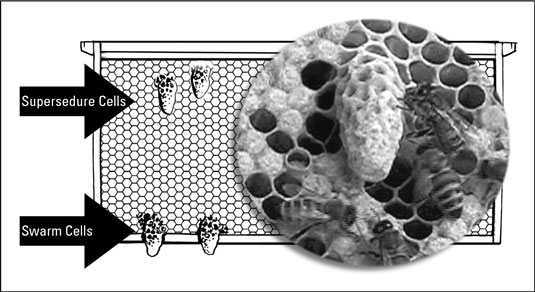 Estimate how many eggs her majesty is laying. One good way to tell is if you have one or two frames with both sides 3/4-filled with eggs and larvae. That means your queen is doing a super fantastic job. Congratulations!

If you have one or two frames with only one side filled, she’s doing moderately well. If you find fewer than that, she’s doing poorly, and you need to consider replacing her as soon as possible.

By the third week you’ll begin seeing capped brood, the final stage of the bees’ metamorphosis. Capped brood are light tan in color, but note that the brood cappings on older comb are a darker tan or even dark brown. The capped brood are located on frames that are closest to the center of the hive. Cells with eggs and larvae are on the adjacent frames.

An excellent queen lays eggs in nearly every cell, skipping few cells along the way and resulting in a pattern of eggs, larvae, and capped brood that is tightly packed together, stretching all the way across most of the frame.

You’ll also notice a crescent of pollen above each capped brood, and a crescent of nectar or capped honey above the pollen. This is a picture-perfect situation.

A spotty and loose brood pattern also can be evidence of a problem. You may have a poor queen, in which case she should be replaced as soon as possible. Sunken or perforated brood cappings may be evidence of brood disease, in which case you must diagnose the cause and take steps to medicate.

The third week also is when you need to start looking for supersedure cells (also called queen cells). The bees create supersedure cells if they believe their queen is not performing up-to-par. These peanut-shaped appendages are an indication that the colony may be planning to replace (or supersede) the queen.

If you spot more than three to four supersedure cells, you need to order a new queen, because giving the bees a new queen is far better than letting them create their own. Furthermore, you’ll lose less time and guarantee a desirable lineage. 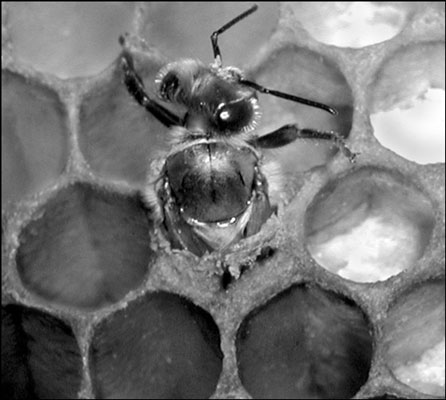 Check every week to see whether your hive-top feeder has enough sugar syrup. Replenish as needed.