What to Do in Your Beehive’s Fourth through Eighth Weeks

By: Howland Blackiston and
Updated: 06-18-2021
From The Book: Beekeeping For Dummies 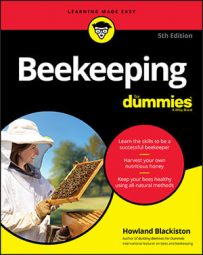 Explore Book Buy On Amazon
Things really are buzzing now when a month has passed since you hived your bees. Or at least they should be. Perform your hive inspection, as always, looking for evidence of the queen (eggs) and a good pattern of capped brood, pollen, and capped honey.

If all’s well, by the end of the fourth week, the bees have drawn nearly all the foundation into comb. They’ve added wax produced in their wax glands to the foundation, creating the comb cells in which they store pollen, honey, and brood. When seven of the ten frames are drawn into the comb, you want to add your second deep hive body. Here's how to do it: The upper deep will be used during the early summer for raising brood. But later on, it serves as the food chamber for storing honey and pollen for the upcoming winter season.

Watch for movement under the capping. A new bee is about to emerge! She’ll chew her way out of the cell and crawl out. At first, she totters about, looking like a newborn, yet she quickly learns how to use her legs. 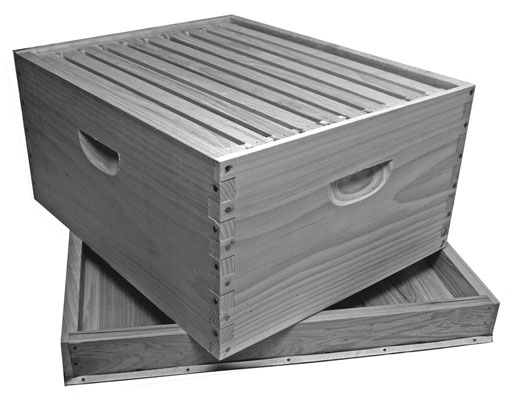 During weeks six through eight, look for queen cells, but you also want to be on the lookout for cells in the lower third of the frames. They are swarm cells, which are an early indication that the hive may consider swarming. During your first season, don’t be too concerned if you spot an occasional swarm cell. It isn’t likely that a new colony will swarm. However, when you find eight or more of these swarm cells, you can be fairly certain the colony intends to swarm.

Providing more ventilation for your beehive

During weeks five or six, you need to improve hive ventilation by opening the hive entrance. Turn the entrance reducer so that the larger of its two openings is in position. The larger opening is about 4 inches wide. (Eventually, the reducer is completely removed.) The colony is now robust enough to protect itself, and the weather is milder.

You can remove the entrance reducer completely in the eighth week following the installation of your bees.

Manipulating the frames of foundation

By the seventh or eighth week, manipulate the order of frames to encourage the bees to draw out more foundation (a layer of a plastic or beeswax placed inside a frame) into comb cells. You can do this by placing any frames of foundation that haven’t been drawn between frames of newly drawn comb. However, don’t place these frames smack in the middle of the brood nest. That would be counterproductive because doing so splits (or breaks) the nest apart, making it difficult for bees to regulate the environment of the temperature-sensitive brood.

As the eighth week approaches, you may find that the bees may have drawn out seven of the ten frames in the upper deep. When that happens, remove the hive-top feeder and add a queen excluder and a shallow honey super with frames and foundation. The girls now are ready to start collecting honey for you!

Now that there are two hive bodies (later there will also be honey supers) you have more than just one “box” to inspect. You will need to inspect the entire colony: both the lower deep and the upper deep. The process is the same as any inspection, except you will first need to systematically remove all the honey supers and the upper deep to get down to the lower deep. That’s where you will begin your frame-by-frame inspection.

Once all the frames in the lower deep are inspected, replace the upper deep and begin your frame-by-frame inspection of it. As always, you are checking for evidence of the queen, a good laying pattern, and healthy brood.

Use the outer cover (placed bottom-side up on the ground) as a surface on which to place supers and hive bodies as you disassemble the hive for inspection.