What Are "Killer Bees"?

Explore Book Buy On Amazon
First of all, get the name correct. The bees with the bad PR are actually Africanized honey bees (AHB) — or Apis mellifera scutellata if you want to get technical. The "killer bee" pseudonym was the doing of our friends in the media.

How did the AHB problem come about? It all started in 1956 in Brazil. A well-respected geneticist was experimenting with breeding a new hybrid that he hoped would result in superior honey production. He bred the notoriously defensive honey bee from Africa with the far more docile European honey bee. But a little accident happened. Some African queen bees escaped into the jungles of Brazil. The testy queens interbred with bees in the area, and voilà — the AHB become a force to deal with.

Outwardly, AHBs look just like our friendly European honey bees. In fact, you must take a peek under the microscope or do a DNA test to detect the difference. Their venom is no more powerful. And like our sweet bees, they too die after inflicting a sting. The main and most infamous difference is their temperament. They are very defensive of their hives and are quick to become disturbed. Once alerted, individual bees may chase an intruder long distances, and stay hyper-defensive for days after an incident.

There have been reports of human deaths resulting from attacks by AHBs. But these reports are rare and frequently involve elderly victims who have been unable to fend off the attackers or make a fast getaway. The media can put quite a sensational spin on such tragedies, and that has contributed to some bad PR for honey bees in general.

Kate Solomon, shown in the following image, worked for several years in the Peace Corps teaching South American beekeepers how to work with the AHB. Kate's efforts (and, yes, she puts cotton in her nose and ears to keep unwanted explorers at bay!) resulted in not a single sting from these "killer bees." 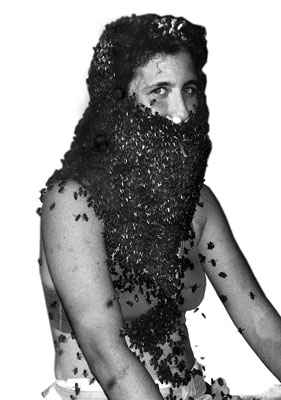 This young lady allows herself to be covered by so-called "killer bees." She did not receive a single sting during this what-in-the-world-was-she-thinking demonstration. Don't try this at home!