The History of Honey

Man has used honey for thousands of years. Certainly as a sweetener, but more often as a medicine to treat a variety of ailments. It has an illustrious history finding its way into folklore, religion, and every culture around the world. In ancient times, honey was considered a luxury good enjoyed by the privileged and royals, as well as a valid form of currency to pay taxes.

The Cuevas de la Araña (Spider Caves) of Valencia, Spain, are a popular tourist destination. These caves were used by prehistoric people who painted images on the stone walls of activities that were a critical part of their everyday life, such as goat hunting, and lo and behold, honey harvesting.

One of the paintings depicts two men climbing up vines and collecting honey from a wild beehive. Immortalized on the rock wall between 6,000 and 8,000 years ago, it is widely regarded as the earliest recorded depiction of honey gathering.

Ancient Egyptians were the first known nomadic beekeepers to migrate their beehives on boats up and down the Nile in order to follow the seasonal bloom specifically for pollination. Beeswax paintings on the pyramid walls depicted beekeepers smoking their hives and removing honey. Egyptians understood the seasonality of beekeeping and the symbiotic relationship between honeybees and pollination. 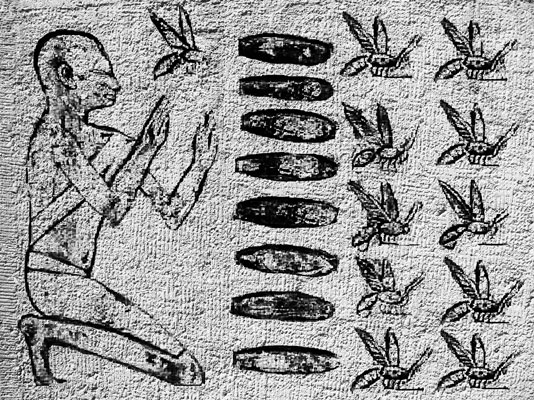 In 2007 a remarkable find was made during an archaeological dig in the Beth Shean Valley of Israel. An entire apiary was uncovered from Biblical times, containing more than 30 mostly intact clay hives, some still containing very, very old bee carcasses.

These man-made hives date from the 10th to early 9th centuries B.C.E., making them the oldest man-made beehives in the world. It is believed that as much as a half-ton of honey was harvested each year from this site.