How to Detect Varroa Mites in Your Beehive

Somehow the Varroa mite has made its way from Asia to beehives in all parts of the world, with the exception of Hawaii. Varroa has been in the United States since the late 1980s (maybe longer) and has created quite a problem for beekeepers. Resembling a small tick, this mite is about the size of a pinhead and is visible to the naked eye. Like a tick, the adult female mite attaches herself to a bee and feeds on its blood.

Within the cells Varroa mites feed on the developing bees and lay eggs. They reproduce at a fantastic rate and cause a great deal of stress to the colony. The health of the colony can weaken to a point that bees become highly susceptible to viruses. 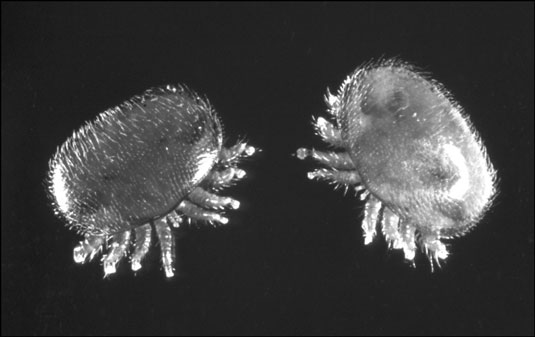 Following is a list of some Varroa mite symptoms. If you suspect a Varroa infestation, confirm your diagnosis using a detection technique.

Varroa detection needs to be a routine part of your inspection schedule.

The powdered sugar shake technique is effective and nondestructive (no bees are killed in the process). You use this process in the early spring (before honey supers go on) and again in the late summer (before the honey supers come off). Follow these steps:

Evaluating the Varroa population using a screened bottom board

About 10 percent to 15 percent of Varroa mites routinely fall off the bees and drop to the bottom board. But if you use a screened bottom board (sometimes called a “sticky” board), the mites fall through the screen and onto a removable tacky white board.

When this white board is in place, mites fall through the screen and become stuck to the sheet (you apply a thin film of petroleum jelly or a cooking spray to the sheet to help the mites stick).

Just insert the sheet for a day or two and then remove it to count the mites.