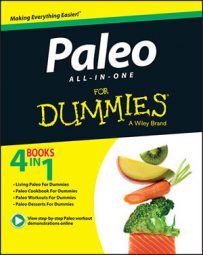 With Paleo fitness, you develop primal power by pushing around heavy things, by jumping, and by sprinting. You don’t need any fancy technical equipment. The good old-fashioned moves work just fine — actually, they work the best.

Power is the ability to exert force rapidly. In other words, power is the amount of work you perform in a certain amount of time. So you can increase power in only three ways:

Although power should be your priority when seeking strength, leanness, and athleticism, it shouldn’t necessarily come first. You need a solid foundation of mobility, stability, and strength before you start to add in power training. If you train power without the proper foundation, injury isn’t a matter of if but when.

Your need for speed

The cave man likely engaged in power-based movements on a regular basis. These types of movements were essential to his survival, after all. If he wanted to eat, he likely had to sprint to catch his food and even more likely had to spear it (or stone it) and then throw it up over his shoulder and haul it back to camp. He couldn’t perform these tasks sluggishly.

Humans aren’t meant to be slow-moving creatures, at least not all the time. People are designed to sprint, run, jump, throw, and everything in between. For this reason, our muscles are made up of both slow-twitch fibers (for endurance endeavors) and fast-twitch fibers (for short, explosive bouts).

The benefits of power training

Training the fast-twitch fibers, or training in an explosive manner, is quite taxing on the nervous system, especially when you train with weight; therefore, power training offers a very high strength return. Many of the power training movements become a blend of heavy strength efforts and elevated cardiovascular stress — meaning you get more work done and burn more calories in less time.

Fast-twitch fibers are also the “look good” muscle fibers, the kind that grow the quickest and offer the most definition. You can think of them as the mirror muscles because they stand out most vividly when you look in a mirror.