What Exactly Is Diabetes?

By: American Diabetes Association and
Updated: 03-15-2018
From The Book: Managing Type 2 Diabetes For Dummies

Explore Book Buy On Amazon
You have diabetes, or perhaps someone you love has diabetes. That’s not an easy diagnosis to hear. But it doesn’t have to be a scary unknown either. In fact, scientists know more about diabetes and have more tools at their disposal than ever before.

The following discussion explains how diabetes affects your body. It’s good to know what’s happening before you dive into how to manage and treat diabetes.

Getting the lowdown on blood glucose

It all comes down to eating — that amazing topic that everyone likes to obsess about. When you eat food, your body breaks that food down into glucose, and then the glucose travels in your bloodstream to waiting cells. That glucose really wants to get out of your blood and into your cells because that’s how you get energy. That’s the goal!

Insulin is a hormone that helps move glucose from your blood to inside your cells. However, people with type 2 diabetes don’t make enough insulin or aren’t as sensitive to that hormone. Therefore, the glucose gets trapped in the blood and can’t get inside your cells. Then high blood glucose — diabetes — happens.

You’ve probably heard of insulin, and you may associate it with injections or an insulin pump. We usually think of that as the synthetic or man-made medication. But the hormone in your body is also insulin. And it’s one of the most important hormones for helping you metabolize your food and get energy.

Specialized beta cells in the pancreas make insulin. The pancreas, which is totally essential and underappreciated (until it stops working), is little, about 6 inches long, and sits right behind your stomach. 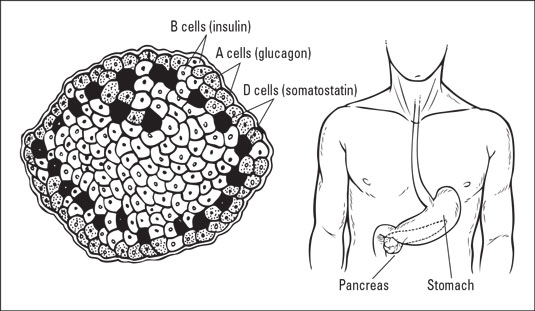 The pancreas and its specialized cells.

Beta cells are the only cells that make insulin. In type 2 diabetes, several things are happening with those beta cells:

At the same time that beta cells are struggling in the pancreas, another crazy thing happens: Cells in your body become less sensitive to insulin. So, even though the insulin may be sitting right next to the glucose by a cell, saying, “Hey, let us in!” your cell doesn’t let them in. Instead, your cells need more insulin than ever before to let those glucose molecules inside. This is called insulin resistance or decreased insulin sensitivity.

It’s a double whammy: Your pancreas makes less insulin, and yet you need more insulin than ever before. It’s not a good combination.

If your body doesn’t make enough insulin or if you have insulin resistance, your glucose can’t get inside your cells and builds up in your blood. This is called high blood glucose. It’s the key factor that defines diabetes.

Scientists are still trying to figure out why beta cells fail or die — and also why the body becomes less sensitive to insulin. If they can get to the bottom of those questions, we’re on our way toward a cure for type 2 diabetes.

Insulin is a hormone that helps your cells use glucose for energy. It’s made by beta cells in the pancreas. People with type 2 diabetes may not make enough insulin or may not be as sensitive to insulin — or both.

The American Diabetes Association leads the fight against the deadly consequences of diabetes and advocates for those affected by diabetes. They fund research to prevent, cure, and manage diabetes, deliver services to hundreds of communities, and provide objective and credible information.