By: American Diabetes Association and
Updated: 03-16-2018
From The Book: Managing Type 2 Diabetes For Dummies 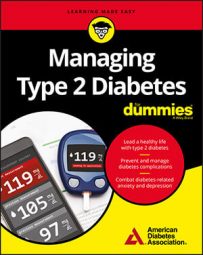 Ask your provider about potential side effects whenever you start taking a new medication. Then keep an eye out for these problems and call your doctor if you notice anything out of the ordinary.

Tell your provider if you’re thinking about becoming pregnant, because some type 2 diabetes medications are not recommended during pregnancy.

The table lists the oral medications for type 2 diabetes.

Biguanides improve the body’s sensitivity to insulin and block the release of glucose from the liver. Biguanides include the most commonly prescribed medication for type 2 diabetes: metformin. Yes, you’ve probably heard this name before. There’s a reason it’s popular: It’s safe, effective, and inexpensive for many people.

Metformin is often the first medication prescribed to patients diagnosed with type 2 diabetes. And it can even be prescribed to prevent diabetes in people at risk for the disease (with a diagnosis of prediabetes).

Metformin was approved in the United States in the 1990s under the brand name Glucophage. Now, the generic form, called metformin, is readily available. You take metformin as a pill, usually two times a day. It’s also available as a liquid. Glucophage XR is an extended-release version that is also available generically.

Metformin doesn’t improve your body’s ability to make insulin, so it’s unlikely to cause episodes of low blood glucose, which is a good thing. It does have some side effects; the most common is diarrhea or loose stools. Other side effects like nausea can occur, too. Tell your healthcare provider about any side effects so she can work with you to adjust the dose or change medications.

A rare but serious side effect of metformin in certain patients is called lactic acidosis, which can cause muscle pain and weakness and other symptoms. People with severe kidney disease should not take metformin.

Ask your provider about vitamin B12 deficiency if you’ve been taking metformin for a long time. He may measure your B12 levels and, if they’re low, recommend taking a vitamin B12 supplement.

Sulfonylureas were first approved in the 1950s, and they’re often taken once or twice a day.

Meglitinides help you make more insulin and lower your blood glucose. They include repaglinide (Prandin) and nateglinade (Starlix). They’re similar to sulfonylureas but faster acting.

Meglitinides can cause episodes of low blood glucose, weight gain, nausea or vomiting, and headaches.

DPP-4 inhibitors can cause side effects like upper respiratory infections, sore throats, and headaches. They may also cause joint pain that is severe and disabling. And they may cause inflammation of the pancreas, which can cause gastrointestinal symptoms like pain in the abdomen, nausea, or vomiting. Tell your healthcare provider if you’ve noticed any of these side effects.

Incretins are a group of hormones that signal the body to release insulin after eating. Scientists have developed medications that target these hormones for people with type 2 diabetes. Two medications, DPP-4 inhibitors (pill) and GLP-1 agonists (injectable), work by regulating these hormones.

Sodium-glucose cotransporter 2 (SGLT2) inhibitors work differently from the medications covered earlier. They block your kidneys from reabsorbing glucose into your bloodstream and help you excrete excess glucose through your urine. In this way, SGLT2 inhibitors lower blood glucose. They can also help you lose weight. Also, SGLT2 inhibitors could benefit patients at a high risk for cardiovascular disease. These medications include canagliflozin (Invokana), dapagliflozin (Farxiga), and empagliflozin (Jardiance).

SGLT2 inhibitors can cause urinary tract and genital yeast infections and increased urination leading to dehydration. Canagliflozin and dapagliflozin carry a risk for kidney injury. In rare cases, canagliflozin causes an increased risk of leg and foot amputations, according to two large clinical trials.

Alpha-glucosidase inhibitors were approved in the mid-1990s. They’re taken three times a day at the beginning of each meal.

Side effects include gas, stomach pain, and diarrhea. They can also contribute to episodes of low blood glucose, and because these medications can slow the breakdown of sugars such as fruit juice, always use a glucose product such as glucose gel to treat symptoms of hypoglycemia.

Thiazolidinediones (TZDs) make you more sensitive to insulin and lower blood glucose. They include pioglitazone (Actos) and rosiglitazone (Avandia).

TZDs were approved in the late 1990s. They’re taken once or twice a day.

Side effects of TZDs have made them less commonly prescribed, particularly rosiglitazone. In 2010, the FDA imposed restrictions for prescribing rosiglitazone because of concern over increased cardiovascular risk, although those restrictions were lifted in 2013. Rosiglitazone may also increase the risk of bone fractures. Pioglitazone may increase the risk of bladder cancer; people with a history of bladder cancer should not use it. Other side effects include headache, sore throat, and back pain.

Bile acid sequestrants bind to bile acids in the intestinal tract and lower blood glucose and cholesterol. There is one with FDA approval called colesevelam (Welchol).

Dopamine-2 agonists lower blood glucose in some people with type 2 diabetes, although how they work is unclear. One medication, bromocriptine (Cycloset), is FDA approved for this use.

Side effects include dizziness, nausea, and fatigue.

The American Diabetes Association leads the fight against the deadly consequences of diabetes and advocates for those affected by diabetes. They fund research to prevent, cure, and manage diabetes, deliver services to hundreds of communities, and provide objective and credible information.