What to Look For During a Breast Self-Examination

By: Marshalee George and Kimlin Tam Ashing and
Updated: 11-02-2017
From The Book: Detecting & Living with Breast Cancer For Dummies

Explore Book Buy On Amazon
It's recommended that you check your breasts at least once a month, especially during the week after your menstrual period. If you're post-menopausal, pregnant, or nursing, you should examine your breasts on the first day of the month.

Breast tissue enlarges before and during your menstrual period due to hormonal changes and returns to normal afterwards. Examining your breast tissue when it is enlarged due to normal hormonal changes may lead to "false positives," whereby the person thinks they feel a new lump. If this lump regresses when hormone levels drop, it's not likely to be due to cancer.

Examining your breasts can take no more than ten minutes. When you examine your breasts, you're looking for the following things: 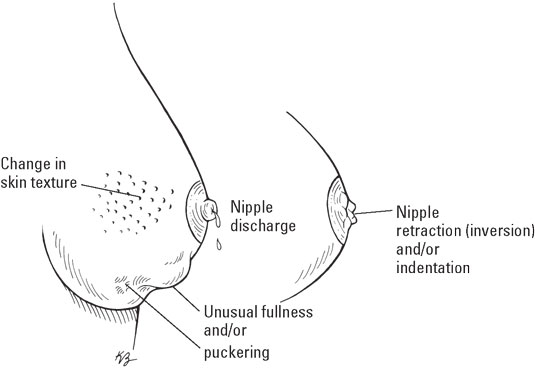 Some things to look for in your visual inspection.