The Basics of Bread Making

Explore Book Buy On Amazon
Bread is king, and bread making is equal parts art and science. Explore the science behind bread making and find out why a scale is so important for success. 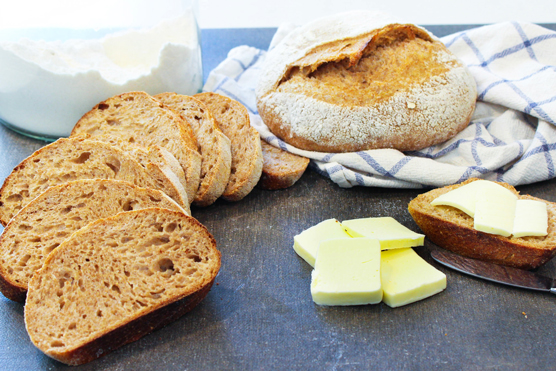 If science wasn’t your favorite subject in school, you may be tempted to just dive into a recipe, but especially if you’re new to bread making, I urge you to give this article a read. It’s only a few paragraphs, and the information about how and why bread making works will not only help you understand what you’re doing in the kitchen, but also give you the knowledge you’ll need to figure out what went wrong if something does.

Donning Your Lab Coat: The Science of Bread

Science is everything in bread making. Each ingredient plays a specific role in the formation of bread. The good news is, this kind of science is fun! Plus, unlike in school, there won’t be a test on Friday.

Gluten is the protein found in flour, and it’s why the type of flour you use matters when you’re baking, whether you’re making cake or bread. The forming of gluten is what gives rise, literally, to bread. Without gluten, your bread would feel like a brick.

When you add water to flour, it creates long, elastic strands from the gluten (known as the gluten matrix). Kneading the flour strengthens those strands, which is important in giving your bread structure, so it can rise.

Yeast is another key ingredient of bread. Yeast is a living thing — it feeds off the carbohydrates in flour and expels carbon dioxide (a gas), which gets caught in the gluten matrix. That nifty matrix you formed while you were kneading holds the gas inside its chambers, and the dough rises. Magic!

Salt has an important role to play in bread making, and it’s not just about flavor (although nothing is quite as tasty as a well-salted bread). Salt conditions the gluten, making it stronger and strengthening the elasticity of the strands. If you use too little salt, not only will your bread taste bland, but it will rise too quickly in an ill-formed matrix. If you use too much salt, it can kill the yeast.

When you place your bread in the oven to bake, the gluten solidifies and holds its form. And when the baking is complete, the bread won’t deflate. Instead, your well-formed gluten will hold its form as the bread cools and after it’s sliced.

Don’t slice your bread too early! You’ll probably be tempted to eat your bread straight out of the oven, but bread needs to fully cool before slicing or the texture will turn gummy and sticky.

Taking the Guesswork out of Baking Bread

Bread making is precise, and in order to have precision, you need a scale.

A food scale is one of the most important pieces of equipment when it comes to successful baking, and not just for breads. For around $12, you can purchase a decent food scale that measures in grams.

As a culinary teacher, I do an experiment where I ask each of my students to measure out 1 cup of flour and then have them weigh it. Some students measure out 128 grams; some, 142 grams; and others, closer to 200 grams (if they’ve packed the flour in the cup). The correct weight of 1 cup of all-purpose flour is 125 grams. Being a few grams off can make a huge difference in the outcome of your bread.

Wendy Jo Peterson MS, RDN, enhances the nutrition of clients ranging from elite athletes to pediatric patients, and is currently a culinary instructor at Mesa College.