The Red Zone Currency Trading Strategy for the Scalper

News trading (buying and selling around high-impact economic data) is notoriously difficult, to the point that many traders intentionally close all their trades ahead of major news reports like nonfarm payrolls (NFP) or central bank meetings. To be successful with this style of trading, you need to have a predetermined, disciplined structure — you don’t want to haphazardly place emotional trades.

One potentially effective strategy is to take advantage of markets’ tendency to gravitate toward round numbers, like 1.3200 in a currency pair like EUR/USD. These levels are significant for two primary reasons:

With a large swath of traders focusing on these areas, it’s no wonder that they exert a strong influence on the market. The difficulty is determining how to design a trading strategy to take advantage of this tendency.

To describe the Red Zone strategy, we like to evoke the analogy of a football game. The final 20 yards before the end zone, where good teams have historically scored a touchdown 50 percent to 70 percent of the time, is referred to as the “red zone.”

For non-American readers, this area is analogous to the penalty area in your version of football [which Americans call soccer], where a team is more likely to score a goal on any open shot.

Note that in both of these examples (football and soccer, er, football), a score is not guaranteed — it’s just more likely.

The same idea can be applied to trading. When an instrument comes within 20 points of a round number (the “red zone”), a continuation to that round number becomes more likely, particularly following a supportive news event.

Because this is a short-term trading strategy, you want to trade heavily traded markets, such as major currency pairs, gold, oil, and widely followed indices, with low spreads. You may also want to focus on trading only during times of high liquidity (when many different traders are buying and selling) to improve the speed of entries and exits.

The Red Zone strategy in action

This first example shows the ideal execution of the strategy. Following the release of weak U.S. housing data, the EUR/USD rallied strongly toward 1.2700. In anticipation of a continuation to that level, the strategy suggested placing a buy-stop order at 1.2680 with a stop loss at 1.2660 and a target at 1.2698.

When the buy order was triggered, the EUR/USD went on to hit the target within 15 minutes for a winning trade. Although the EUR/USD eventually rallied another 20 pips, the highest-probability trade was the initial run to 1.2700. 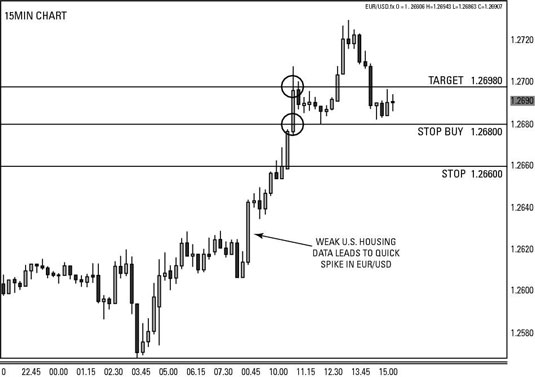 A few weeks later, the EUR/USD was making another run for the 1.2700 handle after the announcement of a new European Stability Mechanism (ESM) for supporting the European banking sector. As in the preceding example, a buy-stop order was set at 1.2680 with a stop loss at 1.2660 and a target at 1.2698.

In this case, though, rates lost momentum before reaching 1.2700 and hit the stop about an hour after entry for a 20-pip loss. The failure to continue up to 1.2700 foreshadowed further consolidation, and prices eventually rolled over. When the currency pair reverses 20 pips from the entry, the probability of a move up to the round number decreases. 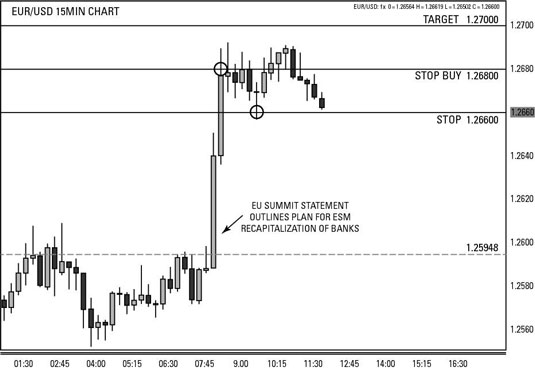 The final example is a sell scalp on the AUD/USD. After dovish Reserve Bank of Australia (RBA) minutes, rates were approaching the 0.9300 level from the topside, and the strategy suggested setting a sell-stop order at 0.9320 with a stop loss at 0.9340 and a target at 0.9302.

Following entry, the pair sold off to hit the target for an 18-pip gain within an hour. Although the AUD/USD did continue to drop from there, the Red Zone strategy is only concerned with taking a small, higher-probability slice out of news-driven moves. 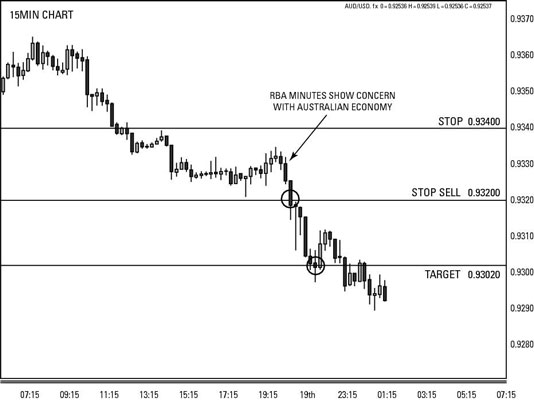