Moving averages are one of the most commonly used technical indicators across a wide range of markets. They have become a staple part of many trading strategies because they’re simple to use and apply. Although moving averages have been around for a long time, their capability to be easily measured, tested, and applied makes them an ideal foundation for modern trading strategies, which can incorporate both technical and fundamental analyses.

In this trading strategy, the focus is on simple moving averages; the goal is to help determine entry and exit signals, as well as support and resistance levels.

Most trading platforms plot simple moving averages for you, but it’s important to understand how they’re calculated so you can better comprehend what’s happening with price action. For example, a ten-day SMA is calculated by getting the closing price over the last ten days and dividing it by ten.

When plotted on a chart, the SMA appears as a line that approximately follows price action — the shorter the time period of the SMA, the closer it will follow price action.

A favorite trading strategy of ours involves 4-period, 9-period, and 18-period moving averages, helping to ascertain which direction the market is trending. The use of these three moving averages has been a favorite of many investors and gained notoriety in the futures market for stocks.

So, if price action is wandering sideways and the 4-period and 8-period SMAs just drift over the 18-period, then the buy/sell signal is weak, in which case we keep an eye on price to ensure it remains below/above the 18-period SMA.

Whereas if the first two moving averages shoot above/below the 18-period SMA with a purpose, then the buy/sell signal is stronger. (In this case, a confirmation of a strong upward/downward trend can come from an aggressive push higher/lower from the 18-period SMA.)

Aggressive traders can enter the position if they see a strong crossover of the 4-period and the 9-period SMAs in anticipation of both crossing the 18-period SMA. In this case, we recommend ensuring that all moving averages are running in the direction of the break and that you keep a close eye on momentum. If momentum starts to dwindle early, it can be an indication of a weak trend.

Keep an eye on the overall trend by using medium-term and long-term time frames. If the market is trending in either direction, then investors have to be watchful of retracements in the opposite direction.

Sometimes price action can retrace sharply, which causes the 4-period and 9-period SMAs to cross over the 18-period quickly, but because it’s a retracement and not part of the overall trend, price action can run out of steam fairly quickly. A trend that’s losing momentum will become evident sooner in the short-term SMAs.

This is where the strategy becomes more subjective. Our favored path of attack from here is to judge the strength of the trend and proceed accordingly. You can wait for the aforementioned moving averages to recross each other or you can use your own judgment to determine when to exit the position.

In a strong trend, it’s sometimes worth exiting the trend when it starts to head in the wrong direction over a few time periods, because sharp pushes in either direction can be subject to retracements. In weak trends, you tend to favor trailing stops.

In any case, a big warning sign is when the 4-period and 9-period SMAs cross back over the 18-period SMA, especially if the trade isn’t working out as planned (that is, it’s a good time to get out to prevent possible further losses).

Ideally, a stop should be placed far enough away that it isn’t triggered prematurely but close enough to minimize losses. It’s basically there in case of a sharp spike in the wrong direction. In many cases, the 4-period and 8-period SMAs will cross over the 18-period SMA before a stop is triggered, which should be a signal to cut your losses.

Investors may improve their odds of identifying trading by using this strategy in conjunction with other analysis, which can help to determine the overall trend of price action and why the market is reacting the way it is. Did price action just break a key resistance/support zone? Was there an event that caused price action to spike in either direction?

Notice that there is a strong push higher in price action after the crossover and then are a few opportunities to exit the trade. It’s also interesting to note that when the 4-period and 8-period SMAs cross back under the 18-period SMA, it’s a very uninteresting crossover (price action and the SMAs are very flat), so it wouldn’t entice us to get short. 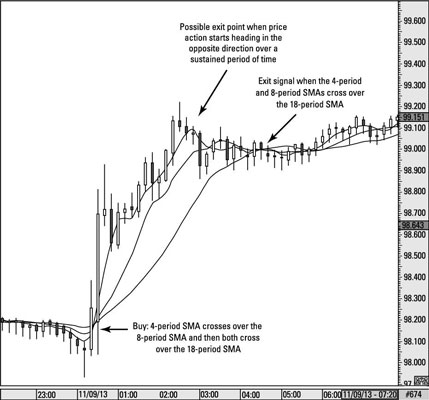 Here there isn’t a strong sell signal, but the overall trend of the pair is lower, so you're comfortable getting short. Set a stop, which is largely discretionary, just in case price action suddenly shoots higher. 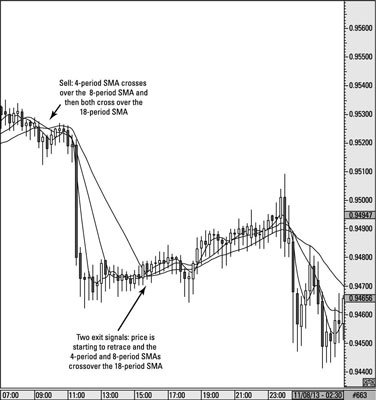