By: Julie M. Hansen and
Updated: 03-26-2016
From The Book: Sales Presentations For Dummies 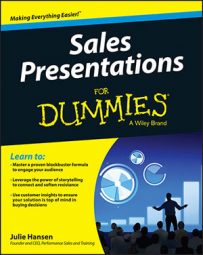 Always have two openings ready to go — one for C-level (executives with "C" in their titles, such as CFO, CEO) and one for end users. That way if an executive shows up late, you can still start on time and give another quick opening to get the key latecomers up to speed without boring the rest of your audience by repeating yourself.

Julie Hansen, who is recognized as the "Sales Presentation Expert," redefines the typical sales presentation and helps salespeople apply best practices. She leverages the power that performers have been using for centuries to engage and move audiences.