How to Use Control Charts for Six Sigma

The primary Statistical Process Control (SPC) tool for Six Sigma initiatives is the control chart — a graphical tracking of a process input or an output over time. In the control chart, these tracked measurements are visually compared to decision limits calculated from probabilities of the actual process performance.

The visual comparison between the decision limits and the performance data allows you to detect any extraordinary variation in the process — variation that may indicate a problem or fundamental change in the process.

The general step-by-step approach for the implementation of a control chart is as follows:

What gets measured gets managed. Deciding what to measure and manage in Six Sigma is determined by your Define, Measure, Analyze, and Improve (DMAI) project activity before you get to the Control phase.

Simply stated, what you monitor with control charts are the critical input Xs and the output CTQs you discover in your project. These are the movers and shakers in your process that align to the needs of your customer. In the control phase, you monitor the outputs — the CTQs — and you control the inputs, the critical Xs. When done properly, this monitoring allows you to benefit from your efforts.

Control charts are two-dimensional graphs plotting the performance of a process on one axis, and time or the sequence of data samples on the other axis. These charts plot a sequence of measured data points from the process. You can also view the sequence of points as a distribution.

Control charts have the following attributes determined by the data itself:

You may ask, “What is the significance of a control limit, and where does it come from?” The simplicity of control limits, coupled with their powerful implications, will surprise you. Control charts use probability expressed as control limits to help you determine whether an observed process measure would be expected to occur (in control) or not expected to occur, given normal process variation.

Therefore, you have a 99.7-percent probability that a process data point will fall between these two limits. That means you have only a 0.3-percent chance that a measurement will be above the UCL or below the LCL. 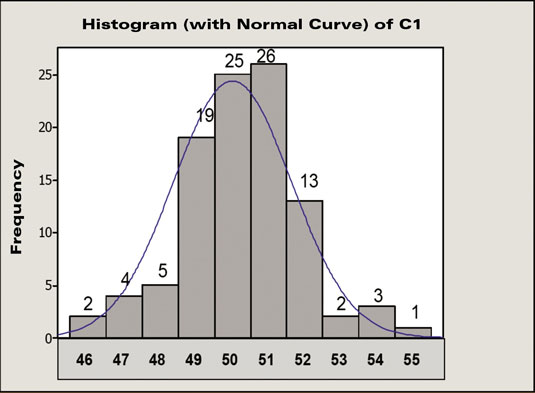 In the early 20th century, Walter Shewhart, one of the founders of the modern quality movement, formalized the ideas used in control charts. He defined that, if a measurement falls within plus or minus three standard deviations of its average, it is considered “expected” behavior for the process. 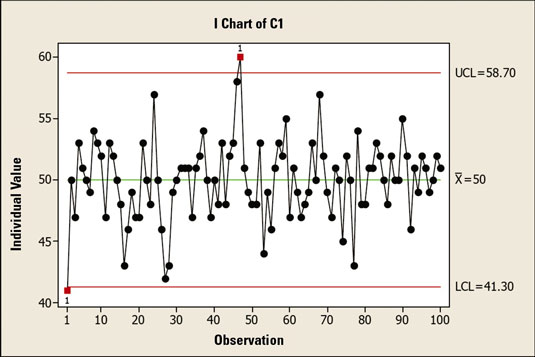 However, if a data point falls outside of the control limits, something special has happened to the process. In other words, something out of the ordinary has caused the process to go out of control. This situation is known as special cause variation, meaning that, based on the behavior of the process up to that point, the probability of that situation occurring is less than 0.3 percent.

A measurement with such a low probability suggests that special circumstances affected the process. This simple, quantitative approach by using probability is the essence of all control charts.