How to Get a Six Sigma Project Approved and Assigned

Your final step in getting your Six Sigma project started is to identify who has to approve the project. Although this task seems like an easy step that requires little effort, don’t take it lightly — it’s vitally important!

You’ve probably been involved in task force teams in the past where things were pushed through without enough thought given to who should be involved, provide support, or provide resources. Are any of these efforts really successful?

Six Sigma treats this process differently than the aforementioned ill-planned task force team. Because you know so much about the problem, where it’s occurring, how long it has existed, its impact, and the benefits of eliminating it, you’re the best person to know who should approve your effort and, more importantly, why.

You’re always better off getting buy-in at the front of the effort than waiting until the last minute; any effort you expend on the project before approval may be for naught if the powers that be want changes to your proposal or deny it outright.

The key individual to identify — the person who will get your project off the ground — is the process owner, the person who has the primary responsibility for the results of the process associated with the problem you’re solving.

If additional approvals are required, those entities will become obvious when you know the process owners. If you’re assigning this project to another Six Sigma practitioner, don’t forget to ask him if he accepts the assignment to lead the project.

You must now decide what skill levels, in the form of Six Sigma Belts, are required to solve this problem. For any organization a large number of smaller “fruit on the ground” and “low hanging fruit” problems exist, followed by fewer “process optimization” problems, and then finally a few “world hunger” issues that aren’t really process problems but more likely management problems. 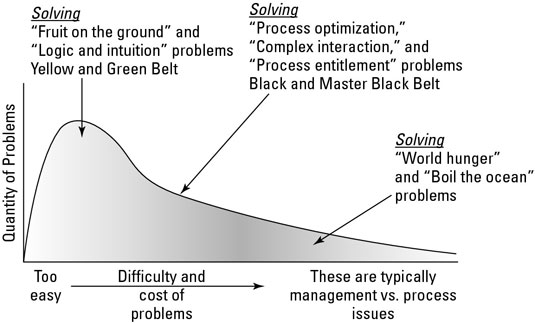 Finally, you have to identify which project team will be associated with the improvement, unless you believe you can accomplish the improvement goal by yourself. Be wary of going it alone: Very few people have all the skills necessary to take on process improvement projects.

Usually, three to six team members, all of whom have expertise from the areas associated with the project, are sufficient. If you’ve enlisted the process owners into your project, identifying these individuals will be easy.