By: Craig Gygi and Bruce Williams and Neil DeCarlo and Stephen R. Covey and
Updated: 09-16-2022
From The Book: Six Sigma For Dummies

Explore Book Buy On Amazon
You don’t have to wait until your multi-vari data are collected to start creating the multi-vari chart for Six Sigma. Instead, you can build the chart, incrementally, adding more to it as you collect more data.

Multi-vari charts can be drawn by hand; in fact, the process operators themselves can create them, providing those folks with a critical opportunity to invest themselves in the discovery of the root cause and the development of the solution.

A multi-vari chart looks pretty much like any other two-axis plot, with time moving from left to right on the horizontal axis and the measured process output metric plotted against the vertical axis. The multiple measurements of each unit are plotted together. Consecutive unit groupings move from left to right over time. A break in the horizontal progression of the chart indicates a temporal break in the process sampling. 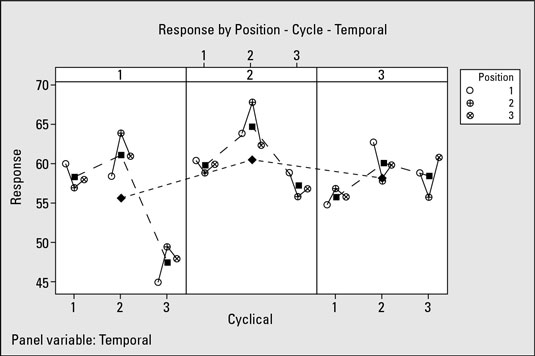 To determine which category of input variable drives the performance of your process output, all you have to do is graphically decide which of the three types of variation — positional, cyclical, or temporal — displays the greatest magnitude of variation in your multi-vari chart. You can compare the variation types by homing in on each one separately. 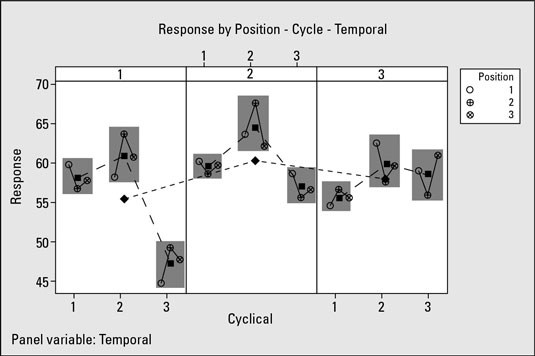 The vertical range of the positional variation — indicated by the height of the gray boxes— graphically depicts the magnitude of the process variation stemming from positional input factors. 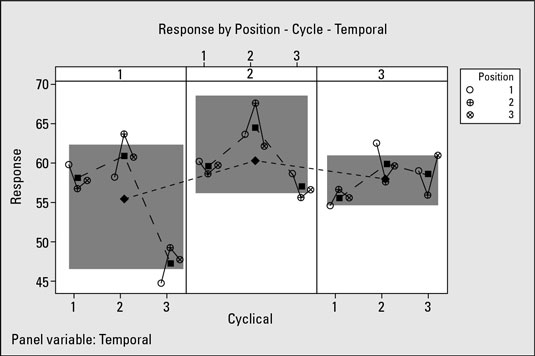 The vertical range between the unit averages — indicated by the height of the gray boxes — graphically depicts the magnitude of variation coming from cyclical factors.

The vertical range between the temporal averages — shown again by the height of the gray box — graphically highlights the magnitude of the variation coming from temporal factors. Temporal factors are those that only change their input value across larger gaps of time but not within single units and not between consecutive units.

You can see that the vertical magnitude of the cyclical variation exceeds that for the positional or temporal categories. That result is the voice of the process telling you that the real root cause of your process performance is associated with some factor whose input value changes between production or creation of consecutive units. 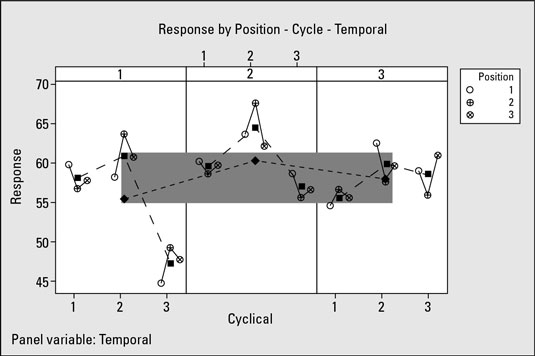