How to Analyze Normal Variation and Probability for Six Sigma

All process and product data in Six Sigma projects have variation; each repeated instance of any measured data point is different from the instance before. And as the collection of repeated measurements piles up, a shape begins to form.

Real data usually cluster around a central value, and the occurrence of data points farther and farther from the central value tapers off. This setup is the classic bell-shaped kind of variation you constantly run across. 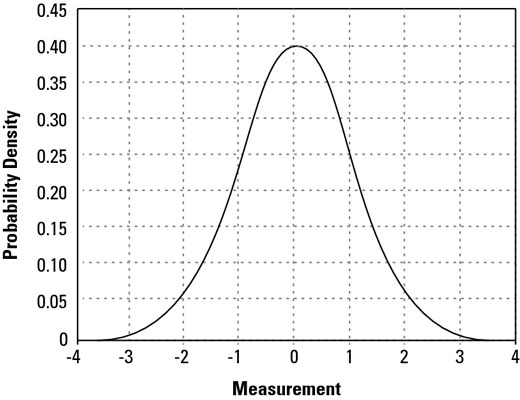 The normal model represents the density of all probabilities for a process or product characteristic — all past, current, and future occurrences of the characteristic in its present configuration.

Notice that the normal curve is always positive; that is, its value is never zero or negative. It’s also perfectly symmetrical; if you fold the curve at its peak, the left and right halves match perfectly. The average value — called μ for the perfect model — occurs at the peak or center of the bell.

The standard deviation — called σ for the perfect model — is equivalent to the horizontal distance from the center of the curve (the average, or μ) to either point on the curve where its shape changes from concave to convex. In Figure 12-1, with the horizontal scale in units of standard deviations, you can see that this distance occurs at the measurement points of –1 and 1.

A final point to note about the normal model is that, if you measure the area enclosed by the bell curve and the horizontal axis, from negative infinity to positive infinity, it always equals 1. That is, the total area under the normal curve represents 100 percent of all possibilities — with 50 percent falling above the average and 50 percent below. 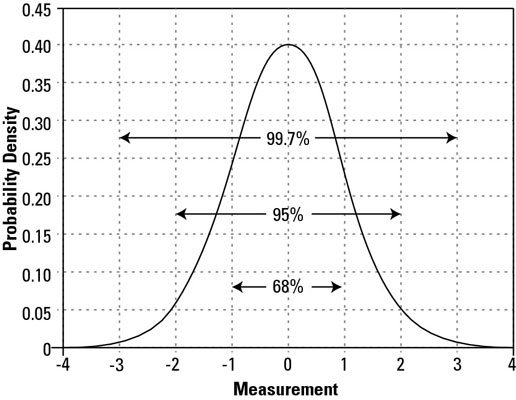 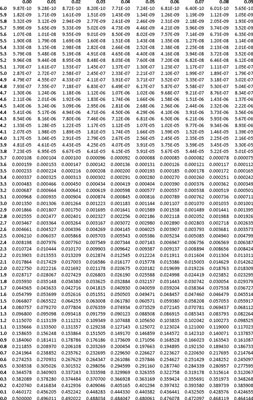 The row labels on the far left of this standard normal table correspond to various plus or minus distances from the zero center of the standard normal distribution. The column labels across the top row add a second decimal place to the distances. The cell contents correspond to the probability beyond the specified distance.

How to calculate the probability above or below a single value

How to calculate the probability between or outside two values 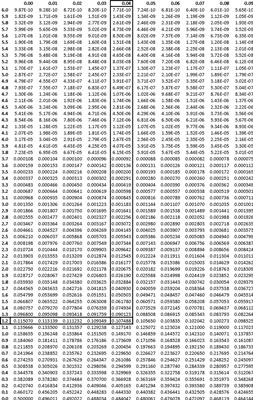 For that matter, how the heck are you supposed to determine that area if you can only look up one probability value in the standard normal probability table at a time? 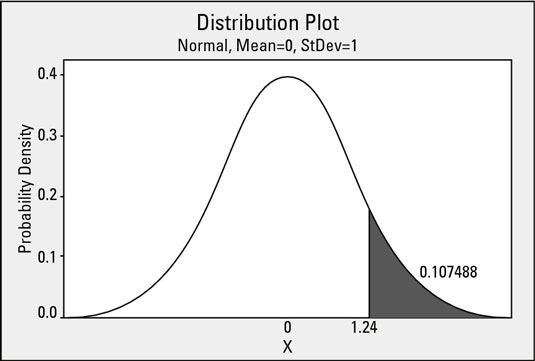 On the flip side, you have a 1 – 0.10560 = 0.89440 (89.4 percent) probability of observing a value outside this interval. These probabilities correspond to a process characteristic that has an average of 0 and a standard deviation of 1. 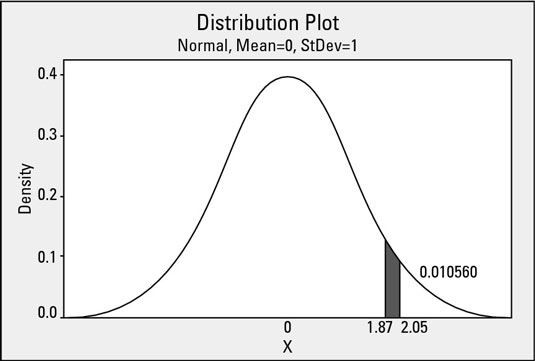