By: Daniel Stanton and
Updated: 01-18-2018
From The Book: Supply Chain Management For Dummies 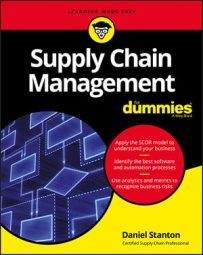 Explore Book Buy On Amazon
Manufacturing operations focus on maximizing the amount of product that they're able to make in a given period. Sometimes, manufacturing processes need to be shut down. Planned shutdown times typically are based on the shifts that people work. Planned shutdowns may also occur so that the company can perform maintenance or change equipment to make different products.

While the other kinds of unplanned shutdowns are often hard to predict and control, you can prevent shutdowns due to a lack of materials by maintaining inventory. Unplanned shutdowns can be hard to predict and control, but inventory is one part of the process that's relatively easy to control. As a result, manufacturing operations managers tend to prefer to have extra inventory as an insurance policy — to make sure that they never run out of materials that would cause an unplanned shutdown. That extra inventory, of course, ties up working capital and eats up space.

Lean techniques help manufacturers minimize the number of unplanned shutdowns caused by inventory stockouts while minimizing the amount of inventory in a supply chain.

One of the key elements of Lean Manufacturing is the use of a kanban or pull strategy for inventory replenishment. A kanban is basically a container for inventory. With Lean Manufacturing, empty kanbans are used to trigger inventory replenishment at each step in a supply chain. This provides for a smooth flow, step by step, of inventory. When you use a kanban system there is no way for inventory to be "pushed" down to the next step in a supply chain. It can only be "pulled" by the downstream kanban.

Lean Manufacturing techniques have become popular because they help to minimize the number of unplanned shutdowns that are caused by inventory stockouts while also minimizing the amount of inventory in a supply chain.

Toyota developed a unique approach to managing the flow of products through its manufacturing process, allowing the company to minimize inventory costs and unplanned shutdowns. This approach involves tools and techniques that are collectively known as the Toyota Production System. As other companies adopted this approach, it became known as the Lean method because it reduces the inventory "fat" in a supply chain.

Daniel Stanton is known as "Mr. Supply Chain." His books are used by students and professionals around the world, and his courses on LinkedIn Learning have been viewed more than 1 million times. He holds numerous industry certifications, including Certified Supply Chain Professional (CSCP) and SCPro.