How Six Sigma Can Benefit Your Operations Management

By: Mary Ann Anderson and MSE and Edward J. Anderson and Geoffrey Parker and
Updated: 03-26-2016
From The Book: Operations Management For Dummies, 2nd Edition

Most companies typically operate their process at a 3 sigma quality level. This means that the process mean is 3 standard deviations away from the nearest specification limit, which defines the boundaries of a good part.

1 percent of the output of a 2.6 sigma process will be defective, assuming a normal distribution. By increasing the quality level to 3 sigma, you can reduce the defective rate to 0.3 percent. Even at this level, a company can lose a significant amount of profits, because 3 of every 1,000 products it makes have a defect. 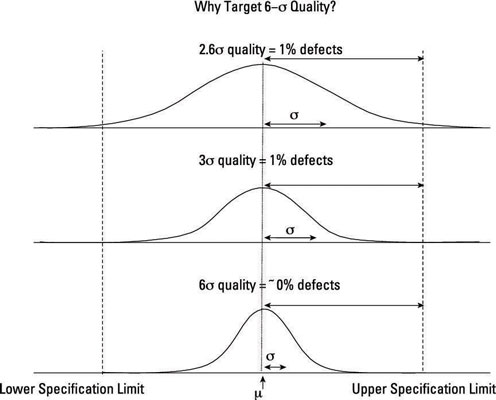 Realizing that 3 sigma just wasn’t good enough, the Motorola Corporation embarked on a quality journey starting in 1985, which led to the birth of what’s now called Six Sigma. Other companies picked up on the concept, and a quality revolution was launched in the world of business operations.

For example, operating at 3 sigma quality for each of 10 components that make up a final product may sound like a reasonable quality level, because only approximately 0.3 percent of each component will be defective.

Here are the fundamentals that separate Six Sigma from its predecessors and living relatives:

The Six Sigma concept applies an increased focus on concrete results that can be measured. Improvement projects are chosen based on the potential financial results the organization can achieve. All improvement is measured and documented. The firm’s attention is squarely trained on actions that produce tangible results when Six Sigma is in action.

Perhaps one of the greatest differences that separates Six Sigma from other quality improvement programs is its emphasis on differentiated skill levels among employee training. Following the structure of martial arts training, Six Sigma uses a belt color system to designate the level of training the employee has received in the methods of Six Sigma: