10 Ratios of Management and Cost Accounting 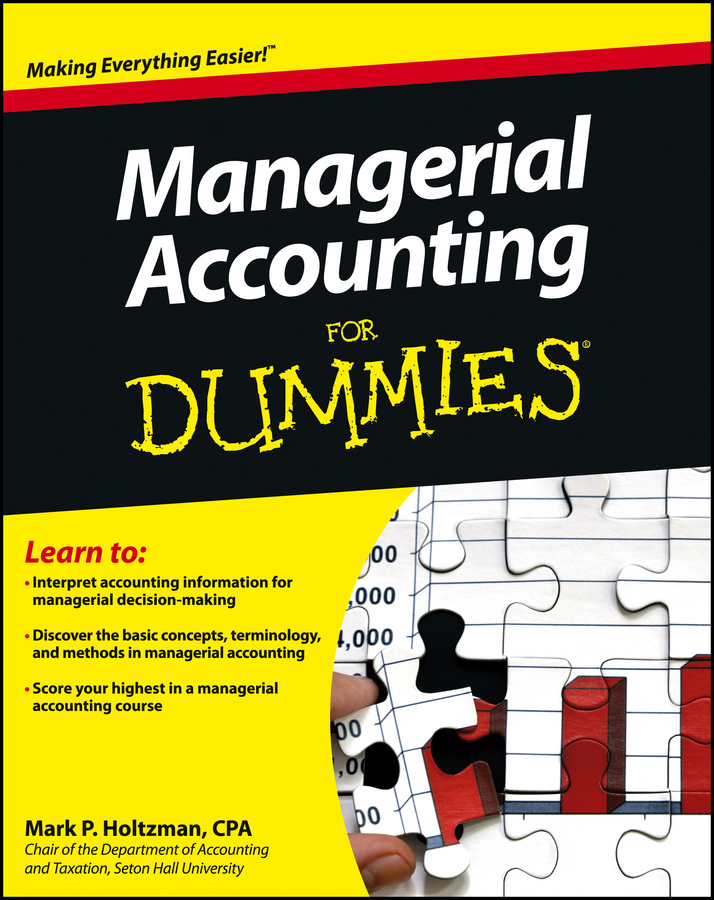 Ratios and other performance indicators are often found using formulas (or formulae). Accountancy has a lot of ratios, but if you want to use the information you need to go beyond learning how to calculate ratios. Management accountants focus on the ratios that apply to the running of the business. They need to understand how ratios are calculated and the key influences on ratios. This understanding can help managers when controlling the business, and when planning or making decisions about the future.

Here are the formulas to find the first four key performance indicators:

Gross Profit is made up of Sales Revenue less Cost of Sales. Within these are the following key elements:

Here are the two forecast income statements showing the effect each alternative would have on profit. 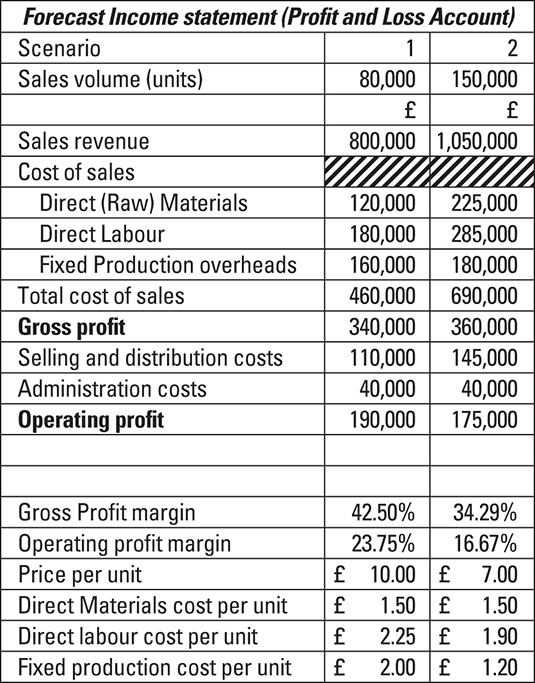 The next analysis is exactly the sort of analysis that a management accountant working for Karl might be expected to carry out (it’s the sort of question that often appears on the AAT Financial Performance at task 10).

Draft a report for Karl and the board of directors. Explain why the gross profit margins are different, referring to the following:

Write a section for each of the five elements showing in each:

The dominant factor means the element within the gross profit margin that has had the greatest influence over the value of the margin. In this case:

Looking at these, scenario 2 appears to win 3-1. But this is no football match. Scenario 1 has the higher gross profit margin!

Management and cost accountants need to know the ins and outs that influence a net profit margin just as much as they need to understand a gross profit margin.

The other key influence on the operating profit margin is the gross profit margin. You can apply these indicators to The Karl Company to answer the following task: explaining why the net profit margins are different.

In the case of the non-production costs, the data hasn’t included the costs on a per unit basis. You need to calculate this to assess the affect they have. 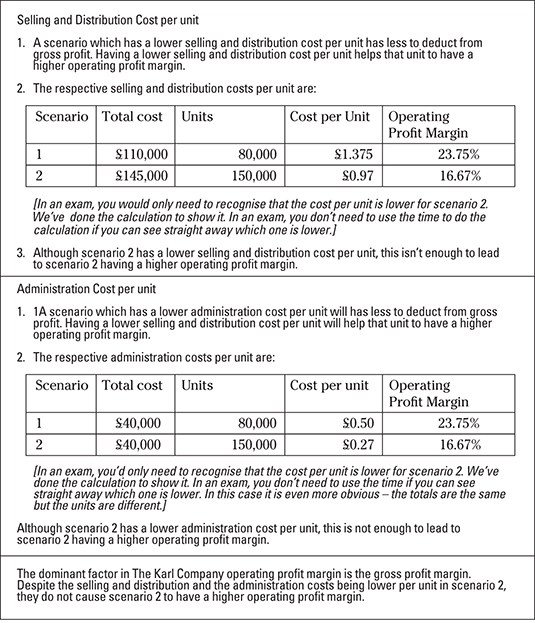 Financial Performance exams can test specific non-production fixed costs. For example, sometimes a scenario includes advertising or the sponsorship of a key personality. Candidates who spot that this has happened can stop and think about the likely impact of such information. Has the advertising led to a much higher sales revenue than a scenario without advertising? Has that higher sales revenue been the result of a much higher price, a higher sales volume or both? And ultimately, has the high advertising cost scenario generated a higher operating profit than the low adverting cost scenario? And does it also have a higher operating profit margin?

These questions become much more manageable if you can visualise the business and each scenario, rather than merely treating the information as an arithmetic exercise with pound signs.

The standard formula is:

The second formula is correct, but more useful in corporate finance than for management accountants. Stick to the first one.

So what do debt and equity really mean?

On a typical statement of financial position, you can often find the total of debt and equity by adding all the assets together and taking away all the current liabilities that aren’t debt (that is, not short term loans or overdrafts).

You use total debt rather than merely the long-term borrowings principally because this is the definition taken by the examiner for AAT Financial Performance. You also use this definition because it clearly shows how much is owing (most probably with an interest charge) and overcomes a problem of businesses deliberately switching long-term debt into short-term debt to avoid covenants over gearing ratios that have been built into specific borrowings. Spotting the proportion of the total finance that has been borrowed gives a good indication of the riskiness of the business.

But you must look at the nature of the business. One of the authors carried out a fair amount of work with contract catering companies. Sometimes businesses in this industry can be almost completely debt financed, and would not be at risk as they have contractual arrangements virtually guaranteeing cash flow at key locations where the business operates. In this case the high gearing ratio is not enough on its own to make a judgement of riskiness.

Our Karl Company Scenario Statement of Assets and Liabilities is shown below for two years. The scenario differences we had in the income statement does not apply here. As in many situations for management accountants, no values are available for shares or reserves, so the assets and liabilities are used to find the debt+ equity value when we calculate the gearing ratio.

From here we can find the gearing ratio using our preferred definition:

Just in case you doubt our calculation of the debt + equity value using the assets and liabilities, just check it the other way. Net assets is the same as equity. Net assets + long term liabilities + bank overdraft = £8,930,000 as well!

This ratio is used to judge pretty much the same thing using both formulas (formulae) although the values used are different. Both calculations use the operating profit, in the return on net assets (RONA) this is divided by the net assets of the business. The return on capital employed (ROCE) is found by dividing the operating profit by the total capital employed, the same value we used to find the gearing ratio.

They both measure the effectiveness of management to generate profit from the money invested in the business. RONA looks at the profit in terms of the net assets (or the equity invested). ROCE looks in terms of all the funds invested including borrowed funds.

For The Karl Company:

Management accountants compare the RONA or ROCE value from one year to the next, or one division of the company and another. Because you only use one, the difference between the two measures is not an issue.

The AAT Financial Performance tests both RONA and ROCE; RONA slightly more than ROCE. Discussions about different RONA values between different scenarios should follow a similar approach to those advocated for the operating profit margin.

The ten performance indicators highlighted here are all relevant specifically to management accountants. They might not all meet the strict dictionary definition a of ratio, and none are expressed as x:1, but they’re incredibly important in managing a business effectively. Managers who learn about these ratios from their management accountants have the opportunity to use them to ensure the business runs profitably and is able to continue. Without them, managers are directing their business almost blindfolded.