How to Use Mobile Social Media for Advertising

By: Jan Zimmerman and Deborah Ng and
Updated: 06-15-2017
From The Book: Social Media Marketing All-in-One For Dummies, 4th Edition 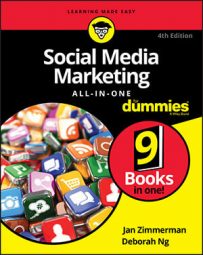 Explore Book Buy On Amazon
Statista projects that the overall social media advertising market will grow from $11 billion in 2015 to more than $23 billion in 2018, representing more than 21 percent of all digital ad spending in the US.

Mobile social media represents a major share of those advertising dollars. About 84 percent of Facebook’s ad revenue, 86 percent of Twitter’s, and 60 percent of Google’s now derive from ads that appear on mobile pages (including YouTube).

Facebook, Twitter, and other social media channels mine their huge populations of users to deliver extremely targeted audiences for advertising based not only on context, hashtags, or search terms, but also on behavior and likely action. As an advertiser, you can now follow users as they research products, compare prices, and make purchases in near real-time from their mobile devices.

Facebook’s mobile advertising network allows you to publish ads not only on Facebook’s mobile pages but also on approved third-party apps and mobile websites outside Facebook, much like Google’s display ad network does.

Twitter, which acquired the ad network MoPub in 2013, has taken a similar approach, allowing you to target your audiences by device, as well as by interest area, geographical region, and keyword. For more about Twitter mobile advertising, visit Twitter for Business. Pay special attention to the use of mobile advertising to encourage people to download your apps directly from a tweet.

Jan Zimmerman owns Sandia Consulting Group and Watermelon Mountain Web Marketing, where she both practices and provides support for social media marketing techniques. Deborah Ng is a freelance writer from central New Jersey. She blogs about books at BooksAndChardonnay.com and shares tips and job leads for telecommuters at Telecommunity.net.