Lead Generation: What Is Your Sales Funnel?

By: Dayna Rothman and
Updated: 03-26-2016
From The Book: Lead Generation For Dummies 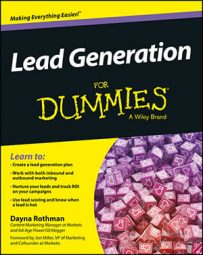 After you have a good idea who your best leads are, the next step to defining your lead generation process is to define your sales funnel — knowing where a prospect is in his buying journey so that you can align it directly to your marketing and sales processes. Mapping your lead generation efforts to your funnel is extremely important as it dictates your campaigns, messaging, and expected metrics.

Take a look at the following figure as an example of a typical sales funnel. 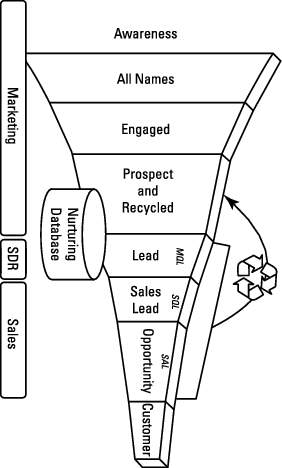 By tailoring programs and messages to this process, you can move leads down the funnel starting from the top of the funnel (early awareness) to the bottom of the funnel (late-stage buyers).

Every company has a different funnel depending on its sales processes. However, for the sake of simplicity, the following details one of them.

Every company's sales funnel is going to be different, so take some time to speak with your internal sales and marketing teams to come up with your own definitions (or feel free to use the previous model).

After you have mapped out your sales funnel and have a good idea of what happens to leads when they come into your system, spend time mapping your lead generation efforts to buying stages. You can define a buying stage by how close a lead is to making a buying decision — and it's critical to create lead generation programs that resonate to where buyers are in their purchasing decisions.