How to Identify New Opportunities to Market to Millennials with Data

By: Corey Padveen and
Updated: 09-27-2017
From The Book: Marketing to Millennials For Dummies 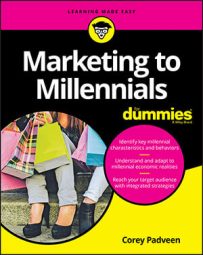 Explore Book Buy On Amazon
As with any marketing strategy, Millennials included, it’s important to use your data to identify new opportunities. This is one of the most valuable takeaways from a data analysis.

Check out some of the elements you want to be on the lookout for when identifying these opportunities within your data.

When analyzing a data set, keep an eye out for statistical outliers or influence points that either fall out of the realm of standard deviation or manipulate the curve of the best of fit line that you’ve applied to your data set. (For more on the best of fit curve, see the nearby sidebar.)

Another data point you’ll want to carefully review are your rates of change. Generally, over time, you’ll see that your audience, engagement, and traffic grow at steady rates. You may see some fluctuations, but for the most part, that rate will remain constant.

If, however, you note that a sudden jump in the rate at which a particular aspect of your program is growing, you’ll want to find out why. You’ll want to identify what the source is in order to work with it and maintain the rate change for the long run. You can see an example of a significant spike in the rate of change.

Focus on the point where change occurred.

Keep an eye out for correlations among your data when analyzing certain key points that led to action from your Millennial audience. Millennials within a particular cluster tend to operate similarly to one another. Identifying correlations between both audience and content characteristics can help you improve your content development process and aid in hypertargeting of content to certain audience clusters.