How Business Coaches Can Check for Commitment to SMART Goals 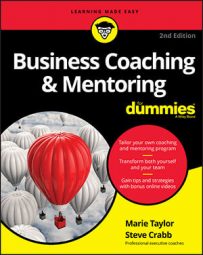 Explore Book Buy On Amazon
The following business coaching example shows you how to check for commitment and desire to established SMART goals. You can ask individuals to do this exercise on their own or do it with them.

Business outcome: By the end of December the customer services team in the meat packing unit will have improved the time for acknowledging and answering initial complaints from five days to three days and have improved customer satisfaction with our complaints process while reducing packing and delivery errors.

On the face of it, this situation looks specific, measurable, achievable, realistic, and timed. You have enough here for someone to go away and work out a delivery plan but it has no “juice.” If you were coaching the customer services team or the managers in that team, you would want to help them create a really rich picture. You want to help them flush out any concerns they’re aware of and any unconscious factors that may block them.

You can use a structured dialogue and ask them:

This involvement is what you want. You want rich, meaningful, personal feel-good indicators that will motivate people to deliver. The fact that the bonus could be higher isn’t enough by itself.

Through facilitating the group, the business coach was getting them to imagine it happening and how wonderful it would feel to drink that first celebration drink together.

You now take all the information they’ve given you and play it back to them while they simply listen and imagine themselves achieving it between now and the deadline. Encourage the client to close his eyes and make the picture — to feel the sensations he has described and hear it all internally.

Just notice what fun you can have with a seemingly bland outcome or goal. It can really fire people up and get them motivated. It makes a fairly boring sentence on a page come alive into something with possibility behind it.

Although this process is describe as a group activity here, you can walk through this with individuals or you can work with a group and ask them to work through their own process individually as you guide them through it.

If you’re thinking of using a structured process such as this one with clients, you can record it on a phone or laptop for them. That way, their own dialogue is there to play back. They have the process available to access anytime they choose. Small things such as a recording can really add value for clients. It places them in control. Empowering clients builds the relationship.