The Value of a Good Exit for a Venture Company

By: Nicole Gravagna and Peter K. Adams and
Updated: 03-26-2016
From The Book: Venture Capital For Dummies

A typical venture capital (VC) fund may have a 10- to 12-year lifecycle: The first 1 or 2 years are spent raising the fund, followed by 5 to 7 years of investing, followed by 3 to 5 years of harvesting. During harvesting, exit strategies are executed.

How a venture company's value increases near the end

Up to half of the ultimate value of the company is realized in the 6- to12-month period leading up to the exit. The graph here shows how value is added to a company over time.

The value is relatively low at the early, “idea” stage, but as various benchmarks are reached and risk is reduced, the value of the company continues to grow. The interesting thing to see is how the value doubles at the end.

Why does value increase so much at the exit? While you’re growing your company, you’re building value, and the company is (hopefully) churning out a certain amount of cash flow. You can calculate the present value of future cash flows to calculate value all throughout this process. 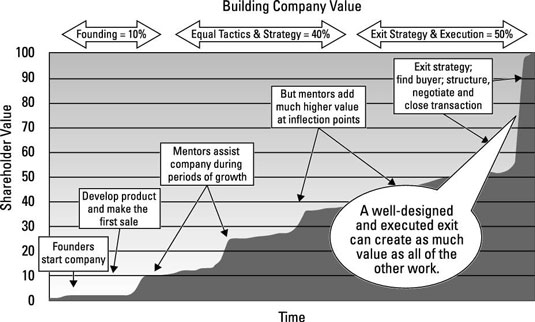 At a well-planned exit, you’re talking to potential acquirers who will be able to significantly increase those cash flows or realize some other factor that exponentially increases value. By understanding what these people are looking for and building your company around that, you will get the most from your company and garner the greatest interest from VCs.

Base company valuation on your exit

When VCs perform due diligence on your company, they compile a variety of valuation models. Most of these models involve predictions about the kind of an exit you’ll have and what value your company will likely have at that event.

Valuation models are often based on the present value of future cash flows. Developing a convincing story about a big exit potential for your business can translate into a higher valuation because your exit is the future cash flow that VCs care most about.

VCs are very good at doing this projected valuation work; however, by their own admission, the process is somewhat imperfect. If you were to show three separate VCs the same company and ask them to come up with an exit valuation, you’d likely see three very different numbers.

VCs come up with today’s value through a process by which they take into account and apply a discount for the time value of money, risks, and other factors. You can influence the numbers that the VC comes up with by helping with the research and understanding a wider range of exit possibilities than would be immediately apparent.

As an expert in your field, you might apply your knowledge and creativity to understand who may find the most value in your company and to develop a story around that.