Marginal Utility and the Marginal Unit

Total utility (the amount of utility gained in total from consuming something) is a useful concept, but economists far more commonly look at how utility changes as consumption at the margin changes. For that, they use the concept of marginal utility: the utility that is gained from consuming one extra unit of a good.

The concept of the marginal unit is one of the most important concepts in the economics toolkit. Economists use it to analyze pretty much all production and consumption decisions. For instance, firms optimize their production based on the relationship between marginal revenue and marginal cost. For a consumer, the concept of marginal utility is key in looking at consumption decisions. But what is this mysterious marginal unit?

The marginal unit is defined as only the last, incremental unit of something, whether that be cost, benefit, utility, or revenue.

Suppose that chocoholic Ray is looking at six bundles of chocolate bars, each containing one more chocolate bar than the preceding bundle. The table describes the utility gained by Ray from consuming the different bundles.

Ray's preferences can be described by the points on this utility function, and an extra column is added, which tells only the gain (or loss!) in utility from consuming an extra bar of chocolate. This is the marginal utility obtained from only the incremental last extra unit of chocolate, which does not include the utility from the consumption of the other bars in favor of looking just at what happens to Ray's utility as he consumes that last extra unit.

The table uses cardinal measures of utility, so you can see what happens with some simple numbers. Suppose Ray gets 5 units of utility from his first bar. The second bar is even more enjoyable than the first and he gets 6 units of utility from it. The third, however, is starting to cause icky chocolate tummy and he gets less utility from that, and the fourth is really not giving all that much more utility. By the time he's on to the fifth he's feeling queasy and not so much enjoying it as suffering it.

The following figure plots the table, and, as you can see, utility rises to a peak level — what economists call satiation — and then becomes disutility. Peak utility is found somewhere between the fourth and fifth bars (and we hope that these are fun-sized rather than full-sized bars). Assuming Ray is economically rational (and doesn't have any other constraints), he stops eating there. 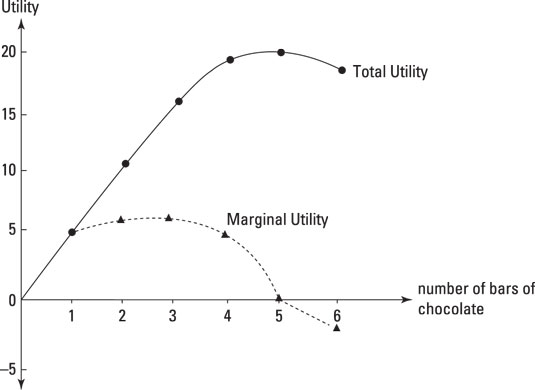