By: Dan Richards and Manzur Rashid and Peter Antonioni and
Updated: 10-31-2016
From The Book: Macroeconomics For Dummies

The figure displays three different interest rates since 1980. These are the 1-Year Treasury Bill rate, the prime rate at which banks historically lent to their most creditworthy customers, and the conventional 30-year mortgage rate. 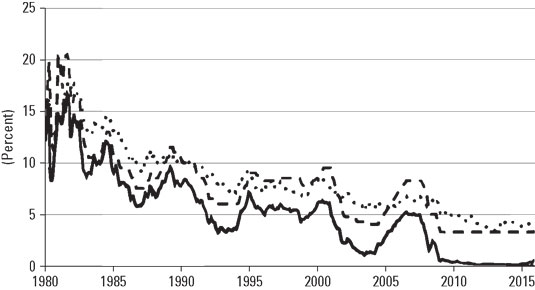 Four features of this data are noteworthy. First, there's more than one interest rate at any time — a lot more. There's also the London Interbank Offered Rate (LIBOR), the AAA corporate bond rate, and municipal bond rates. That's just for starters. There are many other interest rates that you could quote. Luckily, financial markets are integrated. So, as the figure shows, these interest rates all move together similarly over time. That's why macroeconomists can talk about "the interest rate" as a proxy for all them.

Second, while the different rates do move together, they also move around a lot. A good part of this has to do with inflation, but not all. Fiscal and especially monetary policies can play a major role, particularly in the short run.

Finally, interest rates are typically positive, even after correcting for inflation. That is, the real interest rate generally exceeds zero. Why it does is a question asked by economists, philosophers, religious writers, and many others.