In a two-good model, the budget line is a simple straight line whose slope is the ratio of prices. But if, for instance, a tax changes the cost of a good relative to others, that is tantamount to a price change, and you can use the shape of the budget line to think about how to analyze the effect of the tax.

Before doing so, you have to be a bit more specific about the type of tax, because different taxes do different things to the shape of the budget line.

You want to distinguish two types of tax (or their seemingly positive cousin, subsidies) that affect the constraint:

Again, you can treat the introduction of an ad valorem tax as being tantamount to an increase in the price of the good you're considering and manipulate the budget constraint to show it. In this case, the constraint would show the bundles of goods that can be consumed when the sale tax on good 1 is included in the post-tax price.

An interesting case to consider is what happens when a tax is only levied on consumption of a good above a certain price. In Massachusetts, the sales tax of 6.25% is not levied on clothing that costs less than $175. Any individual clothing item that is more than $175 is taxable on the amount over the basic exemption. If you buy a $200 coat, $1.56 or 6.25% of the $25 taxable amount would be added to the price. So, the microeconomics question is: How do you look at this aspect using a budget constraint?

The answer's easy: One slope of the line for purchases goes up to the threshold and then the line bends at that point (see the following figure). 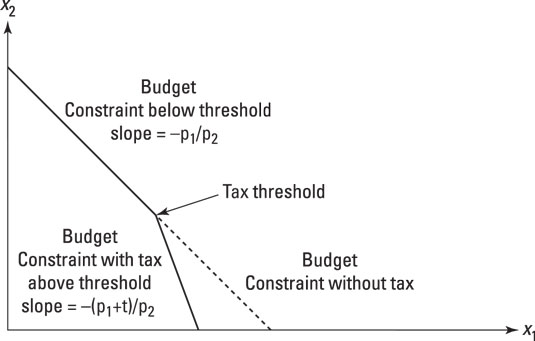 The effect on the budget constraint of a stepped tax.

To make everything easier, think about the tax being levied on a quantity rather than a value tax. Suppose, for argument's sake, that the first item of clothing does not incur a tax, but the second does. Now, while you're deciding to buy a first item, the budget constraint is the constraint for x1 up to the point where x1 = 1. Here, the slope of the budget constraint is –p1/p2 as it was earlier. However, beyond x1 = 1, the slope changes to become –(p1 + t)/p2. As you can see, the budget line is steeper beyond the threshold.

You can do the same type of graphing with subsidies, too. A subsidy, in this case, is just a negative tax, and so instead of adding it to the price you subtract it. Therefore, if good x1 is subsidized, the budget slope is –(p1 – t)/p2. 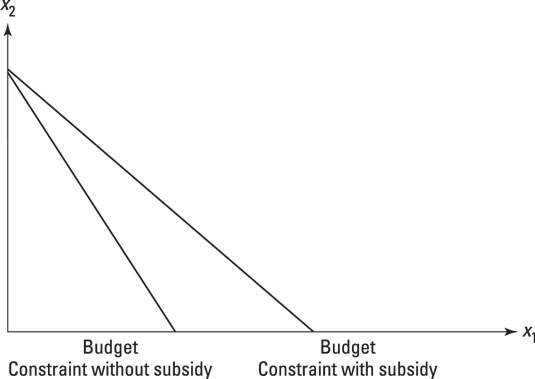 Showing the effect of a subsidy on the budget constraint.

Rationing also affects the budget line. If a good is rationed, one area of the budget set becomes unavailable at any price — the set is said to be truncated in economics-speak.

To show this, cut a vertical line in above the maximum rationed consumption of good x1. To the left of the line, the budget set behaves as normal. To the right, where the maximum consumption is greater than the rationed amount — call it R for the moment — the set consists of goods that the consumer could afford, but can't get. 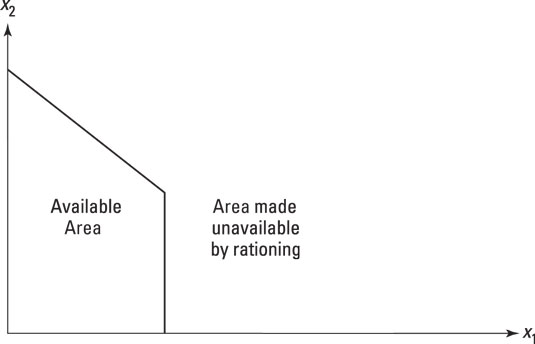