Econometric Estimation and the CLRM Assumptions 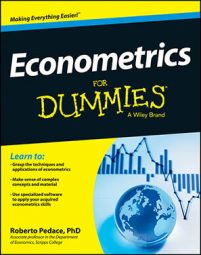 Econometric techniques are used to estimate economic models, which ultimately allow you to explain how various factors affect some outcome of interest or to forecast future events. The ordinary least squares (OLS) technique is the most popular method of performing regression analysis and estimating econometric models, because in standard situations (meaning the model satisfies a series of statistical assumptions) it produces optimal (the best possible) results.